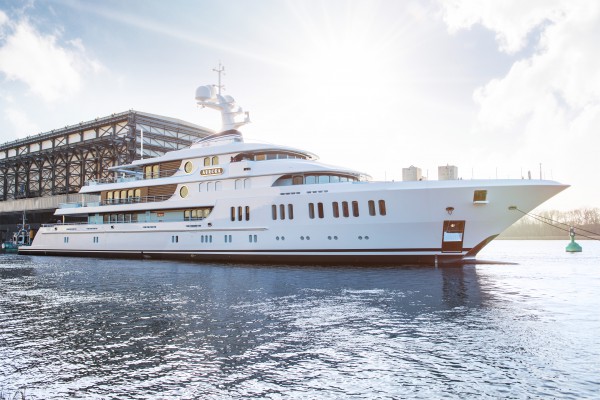 For the second time in Q1, Lürssen has hit headlines with the launch of a vast superyacht project – this time, it’s M/Y Aurora, formally known as Project Thor At 74m, the yacht was sold and managed by Moran Yacht & Ship, yet the new launch looks a little different from the initial renderings released in March 2014.

While the project may look different, there are a number of fundamental design elements which remain in the yacht’s profile. Once you look passed the curved accents that initially draw the eye, the lines are still as hard and straight as those in the original renderings. The hull itself is very much of a Lürssen pedigree style – and very similar to original renderings.

The result is far more classical that the initial rendering, with wonderful curved windows and two large feature portholes. With six decks, Aurora has been described as “a voluminous yacht” by Lürssen, as well as being a “very private” yacht. The gross tonnage of the yacht is not being shared by the shipyard, however it is interesting to note that the 74m yacht is considerably smaller than the majority of yachts delivered in the last four years, which together have an average LOA of 113.8m, not including Aurora.

Following Aurora’s launch, she will embark on a thorough period of sea trials, prior to her delivery, which is scheduled for early this summer, in time for the Med season.

Lürssen has a particularly exciting year ahead with five superyachts scheduled for delivery. Together, these projects have a combined LOA of 557m which, according to the Superyacht Annual Report: New Build will be the highest annual LOA delivered for at least five years. In total, there are eight yachts under construction at the German shipyard, with a combined LOA of 892m.