Twenty months after the initial announcement in September 2018 that Lürssen had secured a contract to manufacture a 54m yacht, the German superyacht manufacturing behemoth has revealed more details about the project. Having shown Project 13800 briefly as she underwent some tests in water before being moved to the outfitting hall where she will remain until the end of her construction in 2021, she represents a milestone in Lürssen’s desire to become increasingly competitive in the 55-75m market. 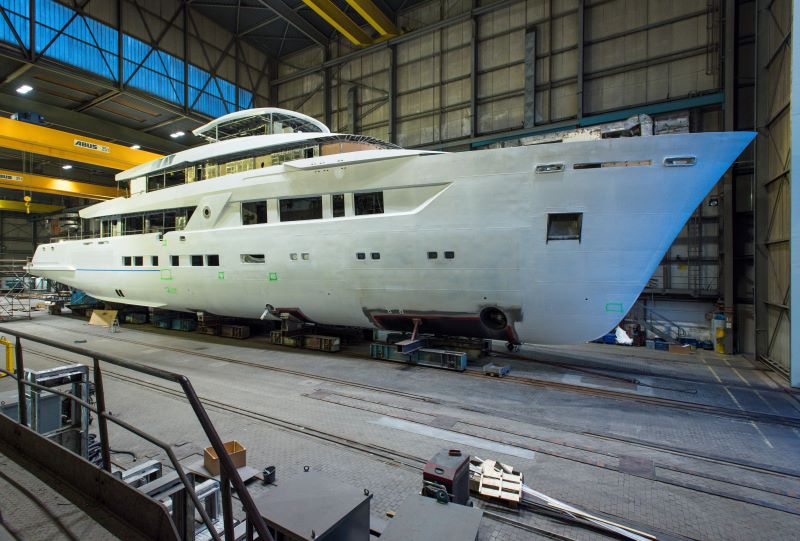 During the design development phase, the project grew from 54m to 55.5m as Bannenberg & Rowell worked on her appearance and gave Project 13800 distinctive lines. Indeed, the initial concept was influenced by Bannenberg & Rowell studies based on the classic yacht Carinthia VI, designed by Jon Bannenberg, founder of the eponymous studio. Through several design iterations, the design evolved to the point where Project 13800 displays an individuality whilst paying homage to the heritage of the Lürssen/Bannenberg legacy.

“It has been great to see how project 13800 has evolved over the last two years and see it now come to life. The technical launch marked a big milestone for the project, and makes me proud to be closely involved in the first Lürssen to be built in this size range for many years,” comments James Hutchinson, owners’ representative.

For years, Lürssen has been known as the shipyard that manufactures some of the world’s largest and most recognisable superyachts. In some ways it has been a victim of its own success in that it is frequently overlooked for projects in the 55-75m, a phenomenon that has no doubt been exaggerated and exacerbated by the medias seeming blindness to all but the largest projects and, indeed, data and analysis. Project 13800 signals that Lürssen is re-establishing its brand as a serious proposition for yachts in this size segment.

“We are very grateful for the success of all the large yachts we have built, however, our core business is between 60-90m and Lürssen has delivered more vessels over the last 15 years under 90m than above! As long as it is a bespoke yacht, Lürssen is the right shipyard,” comments Peter Lürssen, managing director of Lürssen.

This is not, however, to say that Lürssen is changing its proposition or unique selling point as a means of competing with all shipyards for all projects in the 55-75m range. Unlike when tendering for a 90m-plus project, the 55-75m is far more competitive and diverse in its product range. When tendering for a 90m-plus project, there are only a handful of legitimate options, most of which can be found in Northern Europe, although increasingly we are seeing smatterings of competition from elsewhere.

Indeed, many of the most successful products available in the 55-75m range are in fact semi-custom projects, whereas all 90m-plus are fully custom. As a result, there is far more building on speculation within the lower size sectors and, because of the platform nature of many of the builds, there is more flexibility to compete on price. If Lürssen was to blindly compete with all of these projects it would frequently find itself falling foul of products and competitors that have shorter delivery times, most cost-effective vessels and yet have high quality production. Breman, therefore, is eager to point out that just because Lürssen is willing and able to build within lower size categories, there will be no compromise in quality.

“It goes without saying that we have extraordinary capacities in terms of engineering and problem-solving. The question is the extent to which this level of investment and detail is required on superyachts in the 55 to 75m range,” continues Breman. “For those owners who are more interested in the lifestyle and the aesthetic, a bespoke 65m Lürssen project may not be required. However, for those owners who simply do not require a 100m-plus project but value the engineering prowess behind the aesthetics and want a truly bespoke project, then Lürssen is the right yard for them.”

One could easily ask why, when Lürssen has been so successful in building the world’s largest superyachts, is it so bothered about competing within smaller size categories when it could simply seek larger market share within the category that it has seemingly been pigeonholed?

“A client of ours visited the shipyard some 15 years ago and spoke with Peter Lürssen and myself,” says Breman. “The client liked what he saw at the shipyard and said, ‘You guys are the future’. However, his praise came with a warning. He explained that with hard work comes more hard work; out of continued hard work comes success; from success comes complacency; from complacency comes arrogance; and from arrogance comes failure. We do not intend to become complacent with our success in the overlarge category, and we want to continue to challenge ourselves by competing [within] the market.” 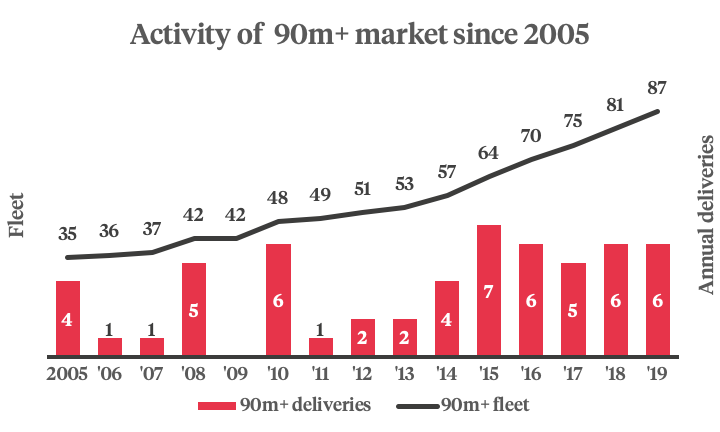 There is no certainty that the 90m-plus category will continue to enjoy the success it has had in recent years, indeed there is already anecdotal evidence growing that suggests many owners are in fact looking to build smaller, given the various logistical shortcoming and exponential costs increases associated with the world’s largest superyachts. Either way, by diversifying their offering and once again competing within the lower size segments, Lürssen is preparing itself for a number of eventualities and refusing to become complacent, arrogant or a failure.