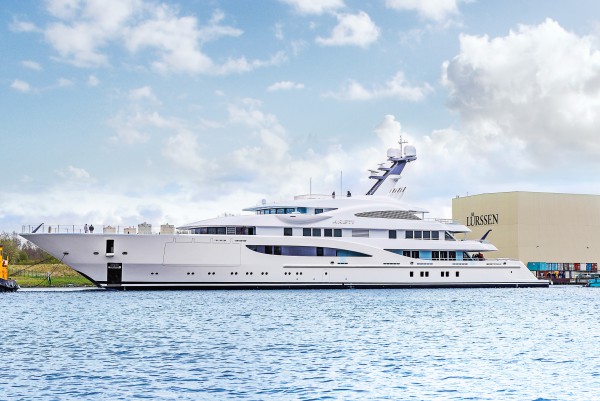 Only seven days after the launch of Project Thunder, superyacht giant Lürssen has announced that 85m project Sasha, also known as Areti, was launched on the 10th April from its Schacht-Audorf (Rendsburg) facility, which specialises in the construction of 60m-90m superyachts. Lürssen has already launched three yachts this year, and the shipyard has now delivered 246m more than last year’s cumulative LOA.

Having been fully designed by Winch Design, the yacht bares a well-weighted and contemporary profile, with a number of curved design elements. The Winch team are no strangers to collaborating with the German shipyard, having done so on eight projects, six of which were for the exterior styling and two of which were interior only.

Although Lürssen is yet to release full details of the interior, in a statement to the press, the shipyard has said the yacht will have “a traditional fresh interior style”. Furthermore, the voluminous superyacht will feature nine guest cabins in total, as well as a spa that includes a sauna and two pools.

The shipyard has also stated that the project is “a completely bespoke design that has been built to meet all of the owner’s exacting requirements”, which includes private exterior decks.

Following the launch of 74m motoryacht Aurora, the smallest superyacht since 66m Iroquois (ex-Ester III), delivered in 2014 it appears that the German shipyard is interested in positioning itself in the sub-100m mark, as well as the most prominent builder of the largest superyachts in the fleet.

This year Lürssen plans to see the delivery of six superyachts with a record combined LOA of 644m, 488m more than the previous year and the highest number of deliveries made in one year in the shipyard’s history.

Lürssen plans to deliver Areti before the end of 2017, following an extensive period of sea trials and final outfitting.