The superyacht caught fire in the early hours of this morning… 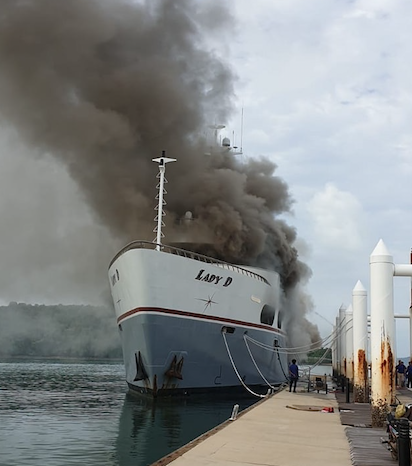 In the early hours of this morning, 56.40m M/Y Lady D caught fire while anchored at the Ao Po Grand Marina in the north of Phuket, Thailand.

It has been confirmed that the fire is now extinguished and all crew members have evacuated the vessel without injury. The damage to the yacht, however, still remains unclear.

Lady D was originally built in the US by Quality Shipbuilders in 1976 with the original purpose of an offshore oilfield supply vessel before being refitted as an oceangoing yacht in 1989.

Gordon Fernandes, from Asia Pacific Superyachts has reported that “marina staff were notified of the fire at 8:25am and called on the local fire department and the Marine Police for assistance.”

When they arrived at the scene Lady D was reportedly “out of reach” as it was berthed 500 metres past the furthest boundary of the port meaning that the officers had to order crew on board to cut its ropes and to prevent the fire spreading further to nearby ships. She was then towed away from the marina.

The cause of the fire is still unknown and an investigation is currently underway.