Athos juxtapose: Left - Before, Right - After

Before acquiring the 62m Hoek- designed, Holland Jachtbouw-built Athos (2010), the new owner chartered Athos for around a year. Although he enjoyed the yacht, he saw many ways in which it would possible to optimise and enhance the amenities and user experience. As the project evolved in his mind, the refit list grew, and what started as a large refit project soon came to embrace all aspects of the Huisfit proposition: Refit, Rebuild and Renewal.

The stern overhang needed to be extended and, on deck, cockpit layouts had to be redesigned and a new forward navigation deckhouse had to be added. New booms, new sails and carbon rigging would ensure improved sail management and performance. All systems were to be updated and a considerable amount of the interior was to be replaced or reconfigured and updated. 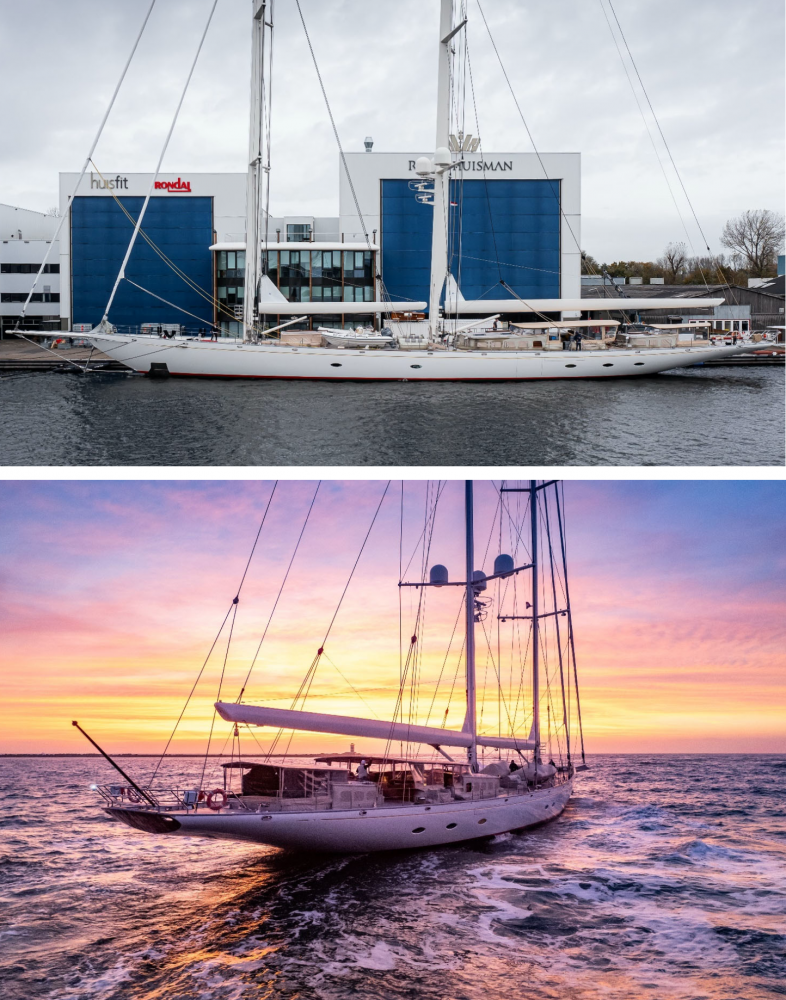 Hoek Design was, once again, involved in all naval architecture work to accommodate these changes, the interior styling and layout of the new owner’s cabin, one of the guest cabins, the main salon, the new crew service area and the navigation deckhouse. Peter Mikic Interiors were responsible for the layout and styling of the main deckhouse and for the overall guest interior decoration.

Athos’ stern has been extended by 1.25 metres, a seemingly modest extension, yet the concave and convex curves of the new section called for exceptional skills in the design and build of the aluminium structure in order to fit it perfectly into the aluminium hull. The extension, with a relocated pushpit, provides a new two-meter area for sunbeds behind the owners’ private cockpit.

The cockpit itself has been reconfigured for easier access and now features extra amenities, including a fridge and ice maker. The interior layout and furnishing of the owners’ deckhouse have been updated, and as a finishing touch, the new stern section has been complemented by a fine teak transom.

The main cockpit and deckhouse, aft of the mainmast, have been extensively modified to provide a true social hub for meeting and greeting, al fresco dining and relaxed leisure activity. The new cockpit is wider and longer and can comfortably provide dining for 12 people. There is also informal seating for guests to meet in smaller groups or find a quiet corner to enjoy a read. Coffee tables are flexibly designed in order to adjust to becoming coffee tables or dining tables. A bar with a fridge and icemaker has been installed. Just aft of the main cockpit, re-designed dashboard consoles sit on the port and starboard of the ship’s wheel. 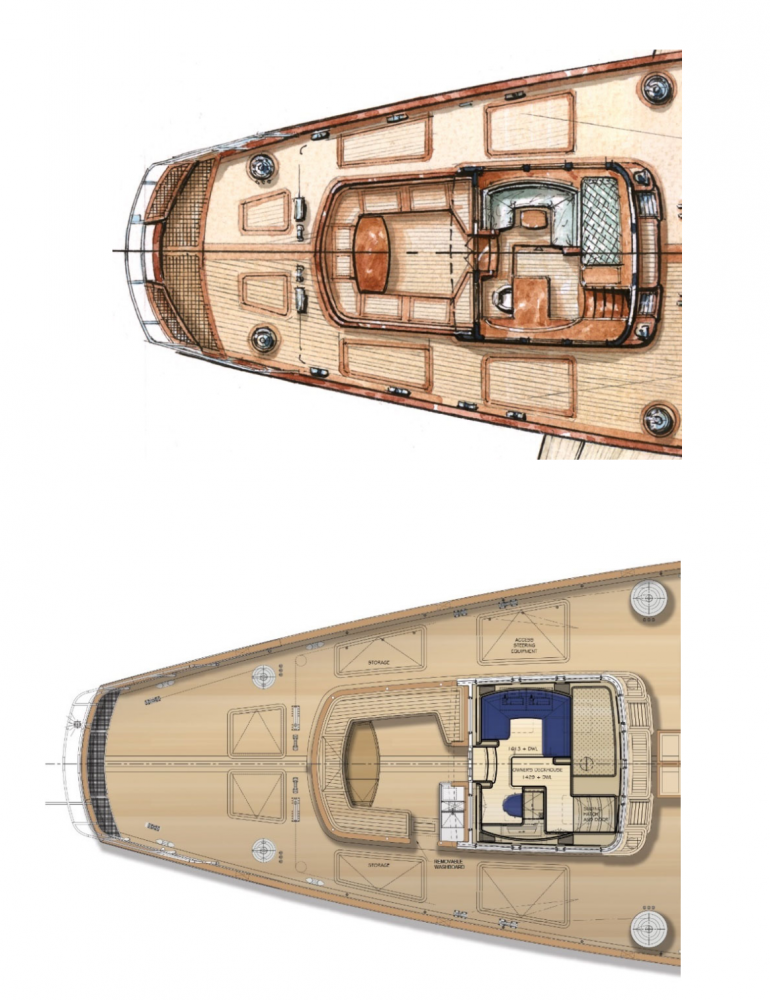 The main deckhouse floor has been raised to one level and provides an enhanced outlook. The entire interior, including the nav station, was taken out and a new design was installed. The deckhouse looks much larger, the traffic flow is better and the natural light has improved. A new classic-looking bar has been built on the portside and a couch occupies the space of the nav station, while smaller dining tables and casual seating maximize flexibility.

More forward the former crew companionway which gave access to the crew quarters has been replaced by a larger, third deckhouse, styled and crafted in the same style as the other deckhouses. 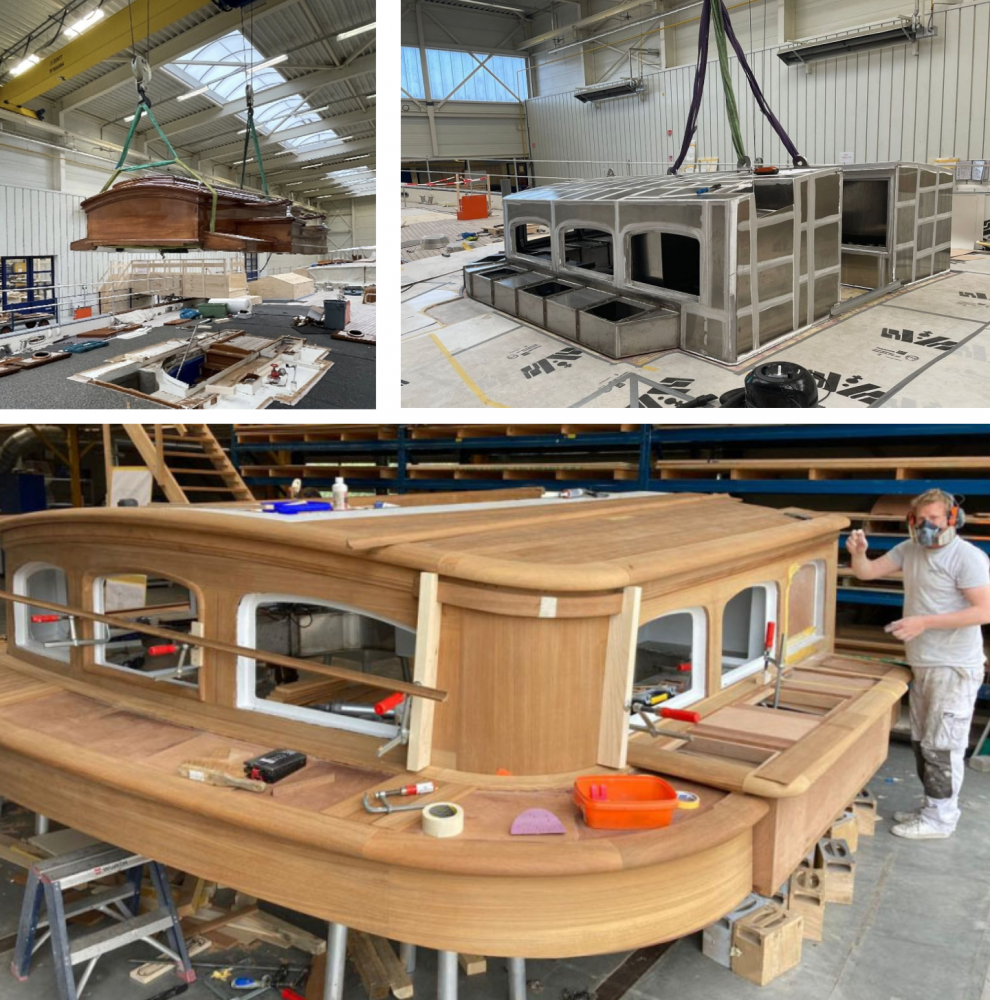 This houses a new navigation and secondary steering station and provides additional social space for the crew and access below. At the same time, the new design of the crew deckhouse improved the flow of the engine room ventilation system and reduced the subsequent noise considerably.

The owner's suite has been totally stripped out, re-designed and refitted. An additional porthole was made on either side and therewith wasted space was eliminated to make full use of idle space. There are now two bathrooms in place of one and a new walk-in closet. Hard panelling has been replaced by subtle fabrics and the plank flooring has been carpeted to create a warm and tranquil ambience.

Just forward of the owner’s suite, a day head has been removed. The space thus obtained has been incorporated into the aft port guest cabin, where a fixed Queen bed and a sofa have been added. Along with the other three guest cabins, the floor has been carpeted and the fielded panels have been upholstered. Everything inside the corridor that connects the guest cabins has been renewed – new walls, new flooring, new carpets, and even a new chandelier! The biggest change in this area was the replacement of the original curved staircase to the main deckhouse with a new stairway. 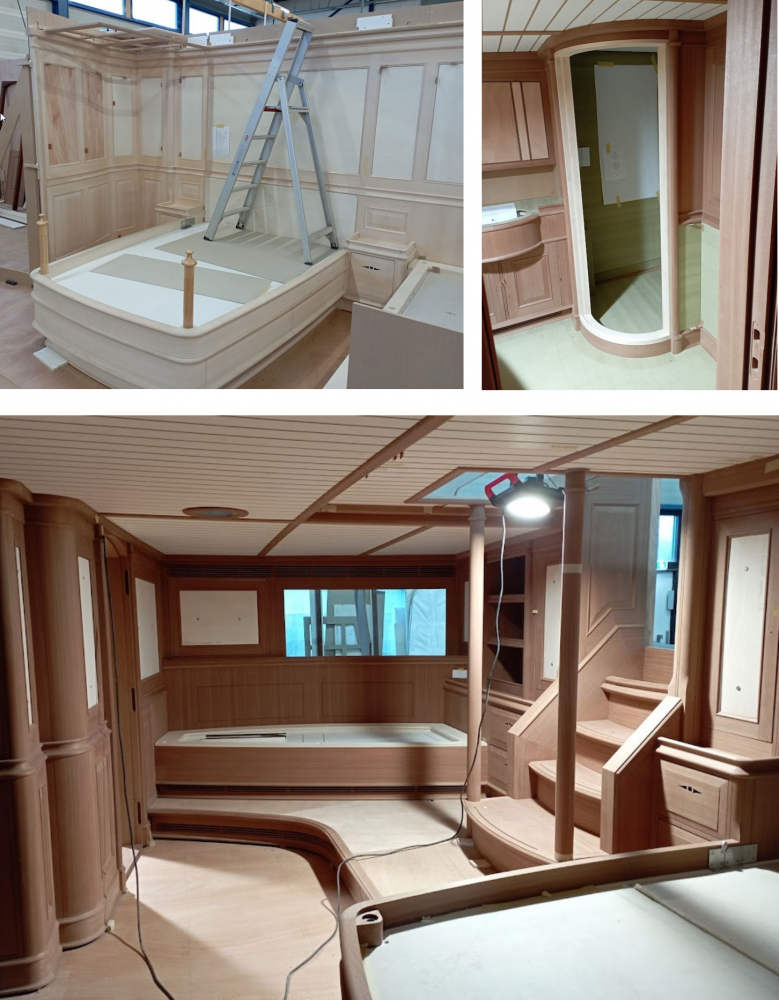 From the main deckhouse, stairs forward previously gave access to a lower salon in an open-plan setting with a showpiece galley. A fireplace was removed and a wall was built between the two areas to create a cosy and intimate media room to starboard. A long bookcase-built cross-ships and luxurious new furniture complete the scene.

The galley to port, behind the new wall, has been custom-rebuilt and all equipment updated for modern haute cuisine practices. A stewardess station has been added meaning that there is more room in the galley for the chef. In the crew quarters, the laundry has all-new appliances, the crew cabins have new floors and the crew mess enjoys the benefit of new worktops.

Other enhancements include all-new navigation, alarm and safety systems and new lighting throughout. All PLCs have been changed and pumps upgraded. All guest spaces benefit from a state-of-the-art communications and entertainment package. The main tender has been completely rebuilt and there is a new second tender. The bottom of the hull was blasted to bare aluminium before a full respray.

This conversion project regularly employed up to fifty skilled people for more than a year. Acting on behalf of the owner, project manager Jeremy “Bear” Wynne from Wynne Projects Ltd. concludes: “The new Athos looks amazing. The multiple modifications have been beautifully done. The attention to detail and finish is excellent. The additions and modifications have not only improved the functionality of the yacht, but they have also enhanced its appearance. The quality of Huisfit’s work is exceptional.”

Athos will be available to charter, through Y.CO, in the Caribbean and Bahamas for this winter season.

Alberto Amico discusses the future of yachting in Genoa

The evolution of Benetti’s 50m yachts