Fleet Review: The year so far

Just one month away from the year’s halfway point how have shipyards performed compared to the initial Annual Report predictions? 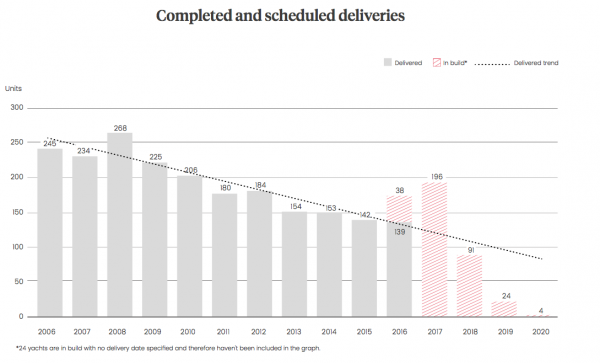 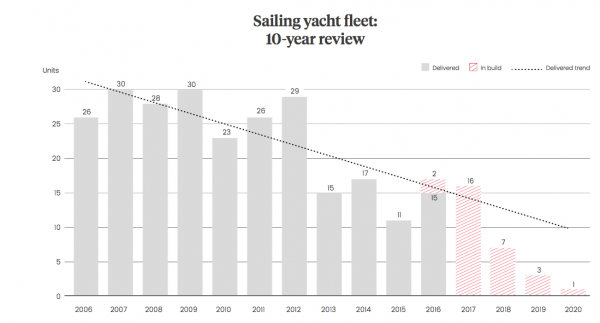 Closing in on the second quarter, is the market on track for the marginal improvement initially predicted at the start of the year? According to The Superyacht Annual Report, “The order book for scheduled deliverers in 2017 suggests that 2017 could prove to be the most impressive year yet– greater even than the peak years of 2008 and 2010”. But now we’re more than a third of the way into the 2017, do these predictions still stand a chance of materialising?

With 15 deliveries in Q1, providing a cumulative LOA of 817.6m, the activity for the start of the year theoretically equates to 7.6 per cent of the 2017 forecast, which currently stands at 196 deliveries. However, activity has proved far stronger on the launch figures, which for Q1 stand at 26 yachts with a cumulative LOA of 1,373.1m.

At the end of Q1 2016, launch figures were looking slightly more positive in terms of length, which cumulatively came to 1628.5m. Furthermore, the number of units launched reached 34, just over 30 per cent more than the first quarter of 2017. The delivery figures, however, are relatively consistent with the 2016 first quarter, which saw three more deliveries at this stage with a cumulative LOA of 719.8m, 10.2m less than this year’s figures.

Taking into consideration April figures, at this point in the year, theoretically activity should be increasing in preparation for the summer season. Retrospectively, in 2016, April and May saw the largest number of launches made in one month, each with 16. Over this period in 2016 there were also seven sailing yachts launched with a cumulative LOA of 287m, while in April 2017 there has been a total of 10 yachts launched with a cumulative LOA of 569.1m, is 21.6 per cent less than the same time for the previous year.

As seen in The Superyacht Annual Report: New Build, if we subdivide the market into the three succinct categories; 30-45m motoryachts, 45m+ motoryachts and the sailing-yacht market, we can analyse each category’s position against the previous year. In terms of deliveries, unsurprisingly, the most successful category belongs to the 30-45m sector, with 50 per cent of the deliveries so far this year, closely followed by the 45m+ sector with 39 per cent.

SuperyachtIntelligence.com reports 33 sailing yachts under construction, six of which have been launched. However, this year there have been three new orders for sailing yachts for Oyster Yachts, Baltic Yachts and Spirit Yachts, the latter of which hasn’t built a yacht over 30m since 2007.