This concept hopes to eradicate the plastic pollution prominent in our oceans.… 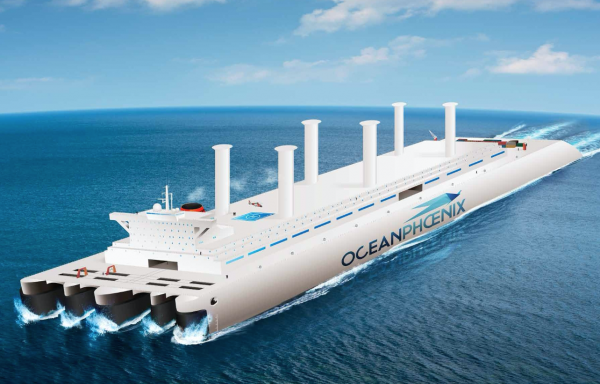 At 360m long and 115m wide, the Ocean Phoenix project is a giant factory-ship concept that hopes to deal with the gargantuan problem of plastic waste in the oceans. The concept is the brainchild of Serge Menard, an inventor, mechanical engineer and naval enthusiast who started the project in 2012.

“Cleaning the oceans is clearly a vital and urgent priority. It will be expensive, but a persistent worsening of the situation would lead to an irreversible and insoluble global catastrophe,” explains Menard. “The Ocean Phoenix is capable of recovering plastic waste located 30 metres below the surface. It is the only solution designed to effectively recover plastic waste at such depth in the oceans.”

The ship is autonomous, which means 24 hours of continual ocean cleaning and would treat a staggering amount of water per second: 16,500 m3 per second, (to put this into context, Ocean Phoenix explain that the concept has an output 2.8 times greater than Niagara Falls). “We're envisioning a fleet of 20 ships minimum, ideally 40,” says Menard. The project works by applying an increasing layer of filtration purposes, without any chemicals. These three mechanical layers collect waste from the oceans but do not allow fish or marine life to enter into the vessel’s system. “We can expect the noise and the high volume of water moved by an incoming ship will scare most fish away much like supertankers do,” explains Menard. “However, should any fish come near the Ocean Phoenix, they will come in contact with a net placed in front of it so most fish will not enter the vessel. On the off chance that the filtering device should capture a fish, the device will raise it in such a manner that it will not suffer excessive compression. The slide prepared for this eventuality would then immediately release it.”

The Offshore Partners, a naval study bureau located in Rotterdam, Holland, have signed a letter stating their belief in the project’s viability, “The Offshore Partners, a company based in the Netherlands, with a wealth of experience in shipbuilding projects, considers the Ocean Phoenix Project to be a commendable and unique opportunity to build a vessel capable of partially eradicating a major ecological problem, which the world is gradually coming to understand is of such a grand scale, that action needs to be taken immediately,” they said, in a recent letter of endorsement directed to the Ocean Phoenix team.

The first phase of the project is estimated to cost 25 million euros. This would cover the launch of the initial scientific expeditions and carrying out oceanographic studies. The project then hopes to receive funding via advertising and sponsorship to support the continued cleanup. A further 155 million euros would be needed for the actual construction of the first ship, with a further 50 - 60 million euros needed for the ship’s yearly operational costs.

In addition to the positive environmental implications, the project believes the construction and ongoing management of the ships will create over 5,000 jobs for the naval industry, as well as offering a new opportunity to conduct scientific research by using it as a platform for marine education.

The huge investment needed for the project is an obstacle for this project to be put into production. Unless privately funded, the project needs a significant financial backing from multiple governments in order to become a reality. As plastic pollution becomes more and more prominent, designers are an integral part of working towards cleaning the oceans. Concepts such as this, although seemingly avant-garde, will push forward the way we see solutions to the toxic impact of plastic in our oceans.