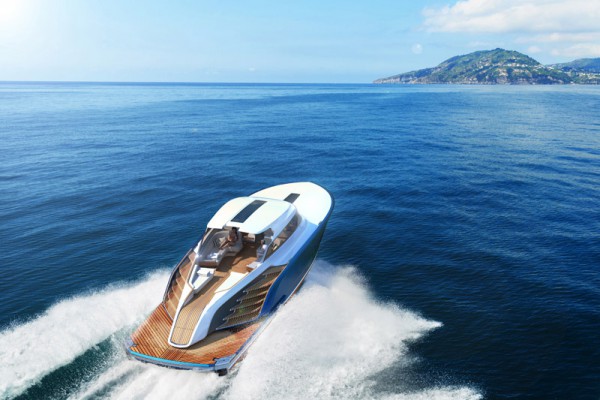 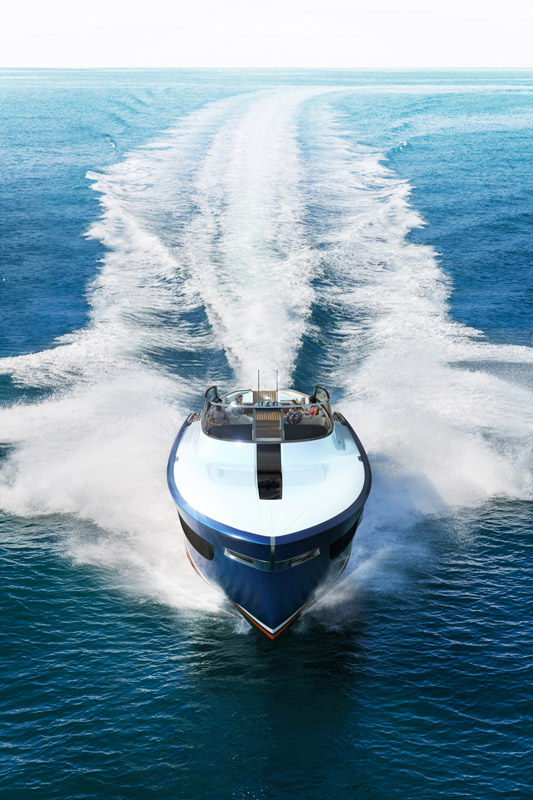 The Aeroboat series, and in particular the 65-foot Areoboat S6 unveiled today at the Superyacht Gallery event at the Saatchi Gallery in London, grew out of the studio’s original Aeroboat 50 concept released in 2013. Since renamed the Aeroboat SV12, it would be powered by a fully marinised Rolls-Royce V12 Merlin engine and is the most performance focused in the fleet. That concept has since been further developed and engineered into a range of aluminium and carbon fibre models in which the hallmarks are style, elegance and performance.

“The first Aeroboat was a very haute couture creation with beautiful design work, but not a lot of reality underlying it,” says Mike Reeves, who co-founded the studio with business partner James Claydon in 2010. “In the second version we brought in naval architects to figure out how it would work on the water. That was the Aeroboat 50, which retained the essence of the first sketch models resolved into a workable package. The S6 is the descendent of that concept.”

With naval architecture by BMT Nigel Gee and carefully considered spaces above and below deck, the family DNA of the S6 is revealed in the trademark Aerostairs—a custom engineered feature that can extend the swim platform, rising to meet with the passerelle or lower below the waves for easy access to the water.

Depending on the specification of the S6— available as a hardtop, fixed bimini or open cockpit—guests can enjoy al fresco dining in the cockpit amidships with sun loungers located either side of the wide passageway leading aft to the passerelle.

Below deck, there is a day cabin forward with large windows that can transformed into a master suite should the owner wish to stay aboard overnight. There is also a shower room, dayhead and galley. The main passageway provides access to a second cabin and a tender garage that can house a 3.8m tender, or a couple of Jetskis.

Performance is still at the heart of S6, which is powered by a pair of MTU V10 2000 M96 engines and KaMeWa waterjets (both MTU and KaMeWa are part of the Rolls Royce group). The latest units from MTU meet current emission regulations while offering outstanding acceleration and low fuel consumption with a top speed in excess of 45 knots and range of 400nm at 40 knots.

The S6 is just one of several collaborations between yacht designers or builders and luxury automotive marques such as Aston Martin, Mercedes, Lexus and Bugatti, but Mike Reeves believes the Aeroboat series is fundamentally different:

“For me at least, if you’re going to design a boat with an automotive brand, you have to have their engines,” he says. “As MTU is part of the Rolls Royce family of companies, we can say that the Aeroboat is powered by Rolls Royce. In essence, we sat down with them and picked the best products the brand is associated with, but the finish of the MTU engines, for example, will be much higher than anything they’ve done before and both the waterjet buckets and the boat will carry the famous RR logo.”

In addition to the S6, Claydon Reeves and Rolls Royce are working on larger models, with an appropriate increment in the power package from V10 to V12 and V16 engines with gas turbines.

“Each model has to offer something significantly different to the one before,” Reeves points out. “We’re not just taking about a few feet more in boat length.”

Where the S6 would be built is still an open question and Claydon Reeves is in ongoing discussions with several yards.

“We would be very proud if, for obvious reasons, it was built in the UK,” says Reeves. “Having said that, there are excellent yards in northern Europe that could build the hull and the finishing could be done in the UK. Suffice to say, our approach is to use the right people for the right job.”