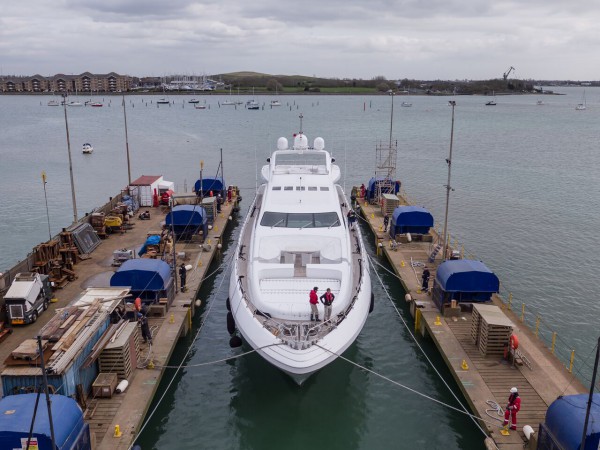 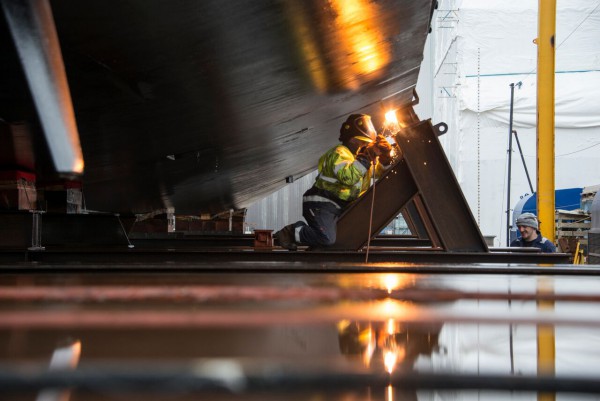 For the British superyacht sector, substantial refits aren’t all that common, when compared to our mainland European neighbours, so when news surfaces that British shipyard Burgess Marine has won a contract for the refit of a 50m Mangusta, it’s a good step forward for the British market.

Or, perhaps, this lends credence to the attractiveness of the UK refit market due to the weakening of the pound. While the falling of the pound undeniably presents difficulties to the lay British citizen, such as diminishing purchasing power abroad, there are, equally, a number of positives that have emerged. Notably, British labour, products and services have become more affordable worldwide.

Built in 2007, the 50m Mangusta 165 arrived at Burgess Marine’s Portchester facility on the 20 March, 2017, and is to be hauled out of the water for at least six weeks. Burgess Marine’s CEO, Nicholas Warren, explains the work includes main engine and waterjet overhauls and a small pre-season refit.

“This refit is very important to the team at Burgess Marine,” says the shipyard’s technical director Ray Cutts. “With both Portchester and Lowestoft capable of supporting such works, it’s important that we continue to develop our presence in the yachting sector.”

The facility in Portchester has an additional 57m project undergoing a refit, as well as a 55m vessel, which is currently being refitted by Burgess Marine in Barcelona.

So, with the weakening of the pound, perhaps the British new-build and refit sector can expect a renaissance period of increased demand as services become slightly more affordable. According to findings from the British Marine 2017 report, post-Brexit figures have revealed “revenues not seen since the financial crash”. The research indicates that exporting boat builders are likely to see benefits from the sterling’s depreciation and, as a result, “confidence is high among a significant number of boat builders trading in international markets”.