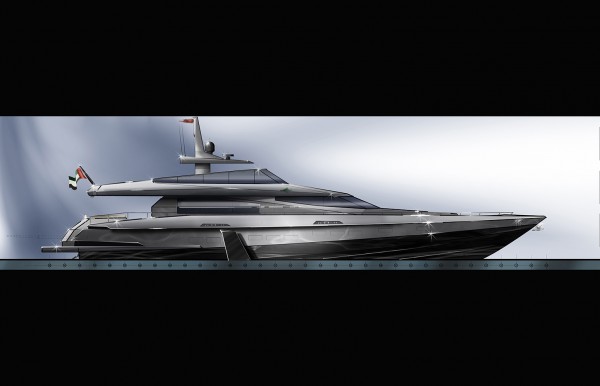 “I feel,” enthused a cheesy-grinned Tom Cruise in the classic film Top Gun, “the need. The need for speed!” It’s a need that isn’t reserved just for 1980s movie fighter pilots and modern hypercar enthusiasts – superyacht owners too have felt the draw of the quick. Some have gone to extraordinary lengths to achieve record-breaking status, with legendary yachts such as Moonraker, Destriero – built for HH The Aga Khan – the king of Spain’s Fortuna and the 42m superyacht The World Is Not Enough setting ever higher benchmarks. US owner John Staluppi is well known for his succession of superquick superyachts, each named after a Bond movie, and it is The World Is Not Enough – a project Staluppi undertook with friend John Rosatti – that currently holds the crown, with a toupee-dislodging top speed of 70 knots.

That could, however, be about to change. Barracuda Yacht Design has developed a 33.5m (110ft) fast superyacht design for an experienced owner who wanted to push the boundaries even further. The result is a sleek motor yacht with a projected top speed of 75+ knots, which would eclipse the current record.

“It has been designed for a client based in the UK who is mad about speed,” says Barracuda’s Iñigo Toledo. “It started with a 34m concept with a set of engines to make 55 knots. Then we changed the propulsion and made it into a 70-knot boat. We did computational fluid dynamics (CFD) to make sure it was sound, we worked with the propeller makers – we did some serious, serious research.”

Toledo is no stranger to speed and cutting edge design, having been involved in America’s Cup sail racing boat designs in the past, and it is this approach to technology, materials and build method that has informed the design of this motor yacht project. “We started it three years ago,” he explains, “and it’s a full carbon boat like an America’s Cup yacht – by that I mean it will use carbon pre-preg rather than infusion because that saves 15 per cent weight in the construction.”

However, it hasn’t just been about weight-saving at every turn – the design has recently sprouted wings in the form of 3m foils that fold up when not in use, but which create an enormous amount of lift when folded down. “Without the foils it’s a 70-knot boat,” says Toledo. “But if you stick to 70 knots you only match the current world record. The foils would be fully submerged when down and they would lift the boat by something like 50 per cent of the displacement – so what was a 60-ton boat becomes 30 tons, and then you go really fast. We have stated that the foils will take the yacht to 75 knots, although in our calculations we are getting to around 78 knots.” There are, of course, practical and safety considerations around foils particularly at high speeds, and the team is currently assessing these concerns.

Aside from the foils and the pre-preg construction, Barracuda has left no stone unturned in the quest for weight reduction. Fixtures and fittings are typically titanium; the windows are polycarbonate except for the fore- and bridge windows; everything from the HVAC system to individual holding pins have been studied to get as much weight out as possible “Everything is crazy, and it’s in every single detail,” says Toledo. “It’s a merging of sailing yacht thinking, hyper-crazy technology, and motor yachts at the extreme and that’s really nice.”

For construction, the idea is to use a machine-milled female mould as it negates the need to add heavy filler to the hull. Moreover, the complex carbon construction will require a specialist yard and interior fit-out company. “There is not one yard that can do it all,” says Toledo, “because any yard that builds extreme racing [sailing] yachts doesn’t know how to do the finishing on a motor yacht, nor its systems. So it will be a two-company set-up for sure.”

If you think that this ‘concept’ is nothing but a design exercise or a pipedream, think again. “It is done, it’s ready,” Toledo enthuses. “I can push the button and it goes to the yard. The last exercise was to put together a detailed budget, and that is completed now. It’s just down to our client to decide what to do next. It’s been fun, it’s been fascinating,” Toledo concludes. “It is, in terms of motor yachts, the most sophisticated thing we’ve ever done.” Here’s hoping the client soon feels the need…