The motoryacht puts the Italian shipyard in a stronger position for The Superyacht Annual Report: New Build… 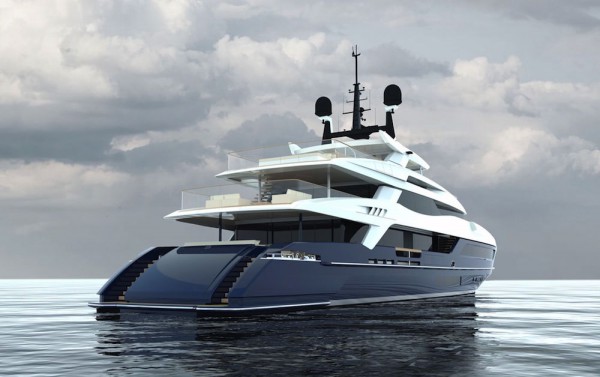 Italian shipyard Baglietto has announced the sale of a 55m steel and aluminium displacement motoryacht for a European client, represented by Edmiston’s Cornelius Gerling.

The news comes not long after the announcement of the sale of 46m Lucky Me at the start of 2017, and the sale of a 54m motoryacht in July.

The superyacht, currently known as hull 10225, is an on-spec build and, as such, is scheduled for a 2019 delivery (adding to the three existing deliveries scheduled for 2019), and will join the five existing superyachts in build with the shipyard, one of which, a 48m, is set for delivery next year.

The new 55m motoryacht has been designed by , using the shipyard’s traditional T-Line platform and, according to the shipyard, embodies the aesthetic features associated with the Italian brand.

At this stage, all the shipyard has revealed is that the layout has been “extensively customised”, includes six cabins, a significant-sized beach club and a sundeck of 160sqm.

“This 55m project is the third work order Baglietto has acquired over the last eight months,” says Baglietto CEO Michele Gavino, “a time during which we have also delivered two new products,” referring to 48m Andiamo and MV19 Ridoc.

Baglietto ranked 25th in The Superyacht Annual Report: New Build 2017, having risen three places since the previous year, though not making it into the 2017 top five for Italy as a whole. In 2016 the shipyard delivered 53.6m Unicorn, yet halfway into 2017 the shipyard had already seen more success, having delivered 46.3m Fast, Lucky Me, and 48m Andiamo, in increase in LOA of deliveries from the previous year of 76 per cent. With two deliveries in 2017 so far and, with this announcement, now six in the shipyard’s order book, Baglietto could be a contender for Italy’s top five yards in The Superyacht Intelligence Annual Report: New Build 2018.

The new-build market will be dissected and analysed, with The Superyacht Intelligence Agency, during a workshop in The Superyacht Forum, taking place 13-16 November in Amsterdam. For more information, or to register your place, click here.

The Superyacht Intelligence Agency is the industry’s leading and largest team of data and research analysts, and produces four Annual Reports on different sectors of the superyacht market each year, as well as updating the live Global Order Book on SuperyachtIntelligence.com on a daily basis. To sign up to the Superyacht Intelligence Business Package, which includes the four Annual Reports (on New Build, Refit, Tenders & Toys and Marinas & Migration), as well as access to the live Global Order Book, click here.