At first glance: Baltic 130 'My Song' ready for action

SuperyachtNews is among the first to go aboard the 39.62m carbon sloop on a wet and chilly day in La Spezia… 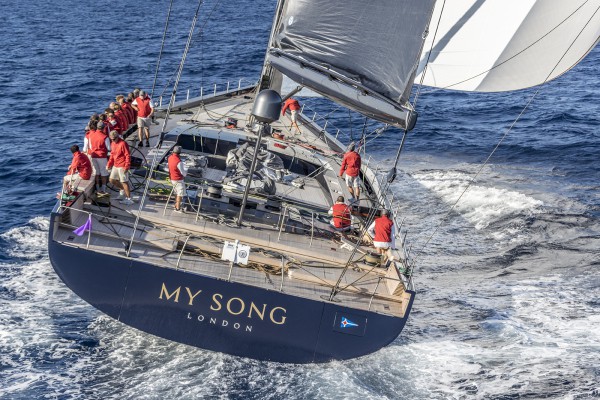 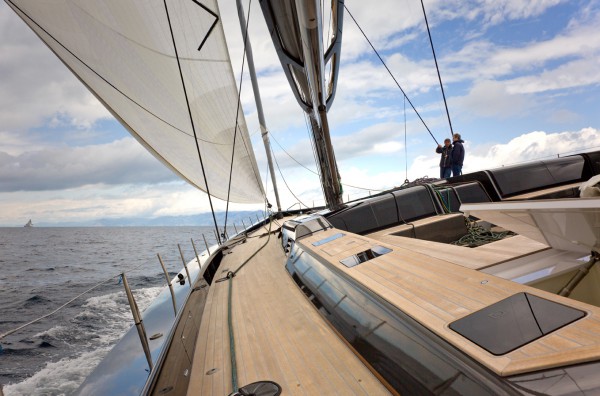 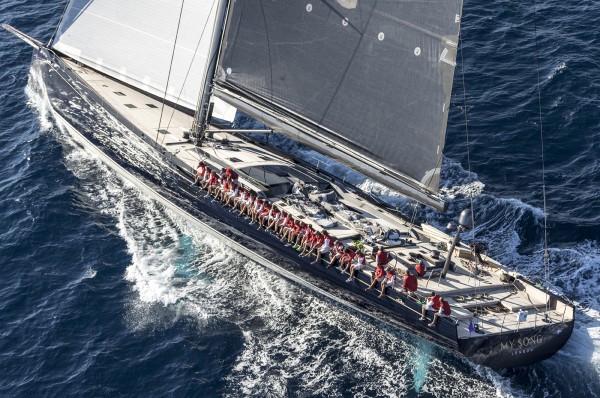 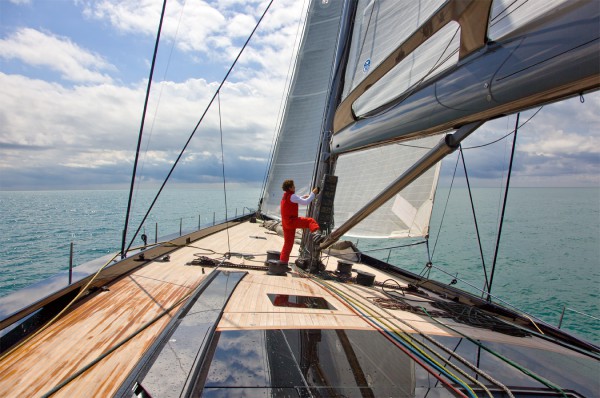 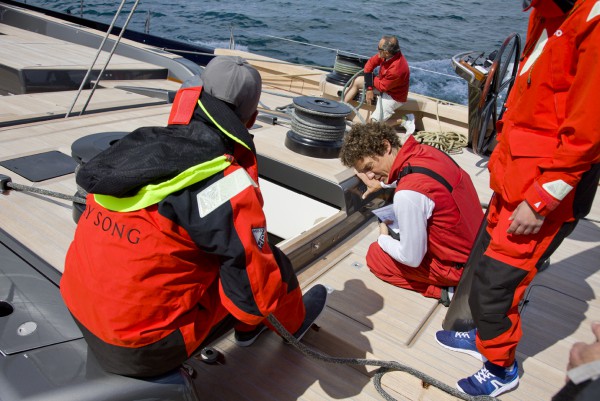 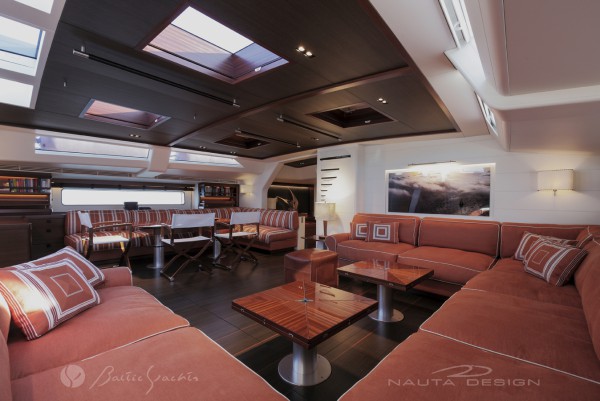 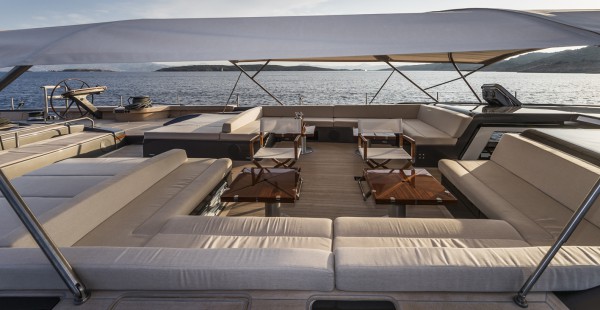 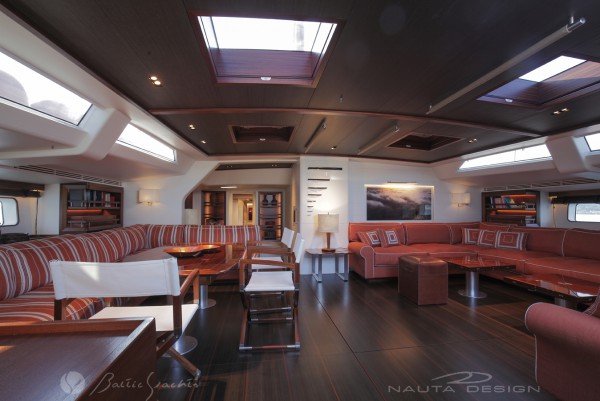 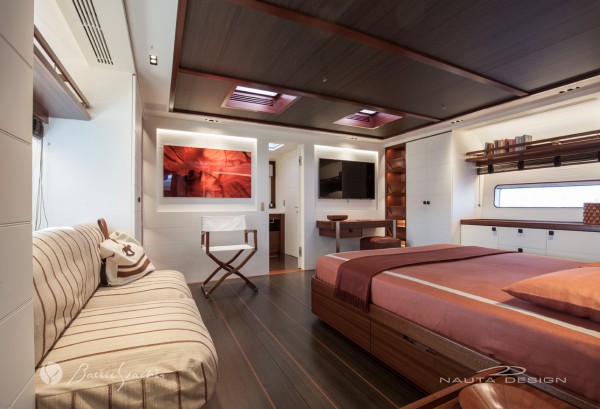 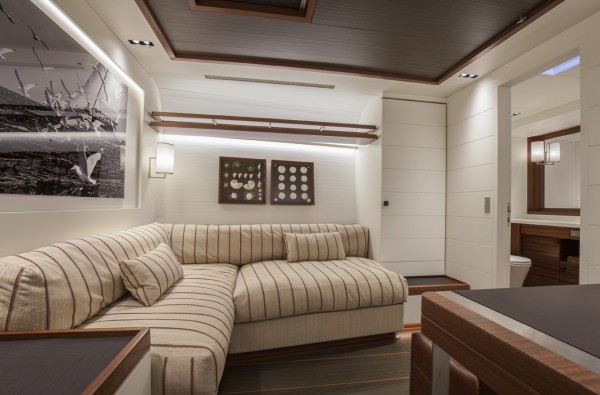 Even when viewed from a distance through the drizzle, My Song’s plumb stem and wide afterbody have obviously evolved from grand prix maxi racers to provide a fast, stable, comfortable ride whether racing or cruising. This was the first time the media had been allowed to get up close and personal with what Baltic describes as “one of the most remarkable, state of the art, all-carbon superyachts ever launched.”

Since her delivery to owner Pierluigi Loro Piana – his first Baltic and fourth of the same name designed by Nauta – at the end of last summer, My Song has spent the winter tuning up and shaking down in preparation for the coming race season. With her Southern Spars rig configured between cruising and racing modes (with pinhead main for cruising or a squaretop for racing, single fixed or running backstays), our spin around the Gulf of La Spezia in light airs and the occasional rain shower was exhilarating (not least for the unseasonable temperatures), but revealed little of the boat's performance potential. With an average cruising speed of 16.5 knots and almost 30 knots when planing in full competition mode, the Velocity Prediction Program (VPP) shows she will be one of the fastest yachts of her type in the world.

From the engine room, Baltic CEO Henry Hawkins pointed out another of My Song’s innovations: her Retractable Propulsion System (RPS) not only leaves the hull entirely flush when the propeller is withdrawn, but also acts as a stern thruster as the forward-facing, pulling propeller pod can azimuth through 90 degrees to port or starboard. This was demonstrated when we effortlessly pulled away sideways from the dock in la Spezia’s Porto Lotti using only the RPS.

Further efforts to enhance performance are reflected in the chord dimension and top-to-bottom taper of the lifting keel fin. This reduces the wetted surface area to increase performance, but also presented engineering challenges in how to guide the fin as it moves up and down between its 7m and 4.8m drafts.

In terms of aesthetics, Nauta Design has produced a yacht with thoroughbred exterior lines and low-key yet sophisticated interior styling. “The [exterior] look is defined by an aggressive line where the coachroof profile is low and almost hidden by the 30cm high bulwarks, which double as footholds when heeling,” says Mario Pedol of Nauta Design. “When cruising they provide additional seating with the handrails acting as backrests.”

Another key exterior design feature on deck is the seriously wide after deck (8.52m max beam) and huge guest cockpit with touch-button sun loungers that fold out of the teak decking or can lie flush when not in use. Numerous skylights and glass prisms in they coachroof admit natural light, while 4m long cut-outs in the bulwarks provide unobstructed views outboard from the low-profile salon.

The interior layout of My Song has the crew quarters aft with an owner’s suite forward of the mast, a studio with bathroom that can be converted into a guest cabin, and two ensuite guest cabins aft of the raised saloon amidships. The styling by Nauta Design is based on an elegantly simple palette of mahogany, leather and white lacquered panels, with the novel addition of surfaces, ceilings and soles manufactured from carbon fibre combined with – wait for it – natural linen fibres impregnated with resin.

Linen is, of course, the plant material for which the Loro Piana luxury goods brand is famous, but this is the first time it’s been combined with high-tech composites as a structural material (the owner even enquired whether linen fibres could be used in the hull construction). The lightweight, high gloss or satin-finished results look remarkably like wood veneers, but required multiple prototypes to perfect the process. Other hand-woven textiles on board are made from the fibres of the Lotus flower to create a tactile fabric that is like a cross between silk and linen.

A busy race season now awaits My Song, starting with the Loro Piana Superyacht Regatta in Porto Cervo at the end of May, followed by Les Voiles de Saint Tropez at the end of September. When the summer season in the Med draws to a close she will transfer to the Caribbean in November by competing in the Yacht Club Costa Smeralda Atlantic Anniversary Regatta, which starts from the Canaries and ends in Virgin Gorda BVI.

Meanwhile, there is another groundbreaking Baltic waiting in the wings to steal some of My Song’s glory: when 54m Pink Gin VI is launched later this month, she will be the largest all-carbon sloop in the world.