At the recent AIMEX Superyacht Awards, Stephen Fisher of Rivergate Marina & Shipyard was given the ‘2014 Australian Superyacht Industry Champion’ Award. SuperyachtNews.com sat down with this passionate Australian for an exclusive interview....… 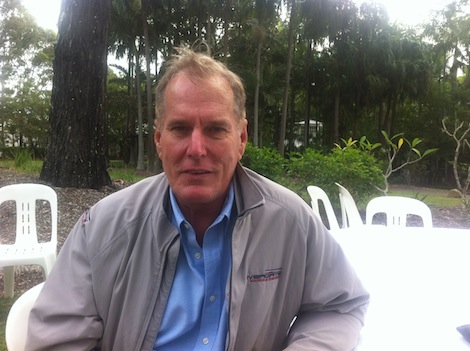 “The Australian refit sector is busy. What we’re seeing is a lot of big boats are relocating to countries like Tahiti and Fiji and the South Pacific and they are wandering through those regions for long periods of time without going back to the Northern Hemisphere. They find the area new, exciting and safe. Between Australia and New Zealand there is high quality maintenance to keep them going. I think they come this way [Australia] hoping to go further west up through Indonesia but their advisors are tending to advise them against that, although from what I hear the ones that go into those areas don’t seem to have any problems with safety.

Stephen Fisher - 2014 Australian Superyacht Industry Champion
The yachts are learning that they can get whatever work they want done undertaken here in Australia. We just finished work and the total repaint of a 73m motoryacht in 74 days and no one’s done that before. When dealing with the 73m yacht, they originally came to us with the project and said how long, and we said 21 weeks. They said ‘you can have 70 days.’ We said ‘we can’t do it in 70 days.’ So they suggested more than one shift a day and that's what we did. We worked double shifts for the full 74 days and the team that was put together to do that included New Zealanders that we bought in to complement the team that was available in Australia, mainly SE Queensland companies.

The business model we use is that we are a small group and we have a family of 265 sub contractors that we call upon as and when we need them. What we do is we match the skill level of a particular contractor to the job on board so where we have four different steel fabricators we know some have better skills in engineering stainless steel and others have better skills in blended stainless steel. We will regularly have several different contractors in the stainless steel field working on the boat, depending where on the boat the job is. What we’ve managed to do is build up a group of people who work together and know that they’ve got to get on and that they are producing the outcome.

Australia might seem expensive on paper but the work ethic is very, very high so the productivity that is achieved over the duration of the job is very high and you don’t have to redo the work. Cheaper options may seem attractive but in reality they are not cheaper. You’ve got to do it right; cheap’s not cheap in the long run.

There’s no doubt in my mind that Australia and New Zealand can do more together. I remember having a Japanese client for many years who owned big boats he left anchored around the world and he was always amazed at how Australian businesses tend to fight each other, whereas in Japanese societies they tend to try and grow the whole cake so they each get a share of a bigger cake. He said to me ‘you’ve got to stop worrying about the guy down the road, do what you do well, and grow the whole cake and it will look after itself. If you get an opportunity to help your neighbour to succeed then do it because if your region gets the reputation of being able to produce positive outcomes then your industry will grow and you won’t have to worry about where your next job is coming from because it will be just around the corner.’ That was the best advice I ever had. That particular owner became a long-term friend.

The relationship between Australia and New Zealand is very special, all we need to do is make that work a little better than it currently is and perhaps next year with the 100 year anniversary of the landing at Gallipoli the ANZAC spirit can come to the fore and we can learn to combine and promote the whole region. Everyone talks about owners being over the Med and the Caribbean but it’s still a pretty big adventure to come Down Under and I’ve got no doubt it will grow. Rivergate for example has just put an 80m berth in to complement the 50m berths we already have, but we’re now getting enquiries from boats over 80m and where do you stop?

As the infrastructure has developed through the South Pacific more and more of these boats will come down to this region. There are owners who are on their fourth or fifth year down in this region and their boats haven’t gone back to the northern hemisphere. Most who come for a short period of time go away saying ‘we wish we’d allocated more time’. I’m very much hearing yachts saying they might go back to the Med next year, maybe, whereas once upon a time they were only here for a few months. It doesn’t suit all, the high heels and stern to at Monaco is not necessarily attractive to this area, but it suits those who want to go to politically stable areas with beautiful sites. Now there is decent refit infrastructure the yachts are committing to longer visits.

I do think that Australian yards are cheaper than big yards in Europe but price should not be what it’s all about. The future for the industry’s bright, you just have to deliver what the client wants. Yachts are demanding, they want what they want and they want it now. Very rarely if you don’t return a call on the same day do you get a second chance because by the time you get back they will have gone somewhere else. The skillsets and facilities are available. Brisbane can accommodate up to 285m in its dry dock and there aren’t many places in the world that can do that. We put a 72m in their recently and it looked like a tinny in a bathtub! All the main engine companies are here, mainly because of their spinoff activity with the mining companies. Whether it’s a major overall to engines or stabilisers, it can all be done here in Brisbane.

I think there’s more that can be done where yachts come into Tahiti, see the South Pacific, go to New Zealand and then across to Australia and then perhaps after a couple of years in this area go up into South East Asia. I think there’s lots of boats in SE Asia that are really enjoying the experience of the region, but not enjoying the fact it is harder for them to get high quality work done. Australia can offer that quality."