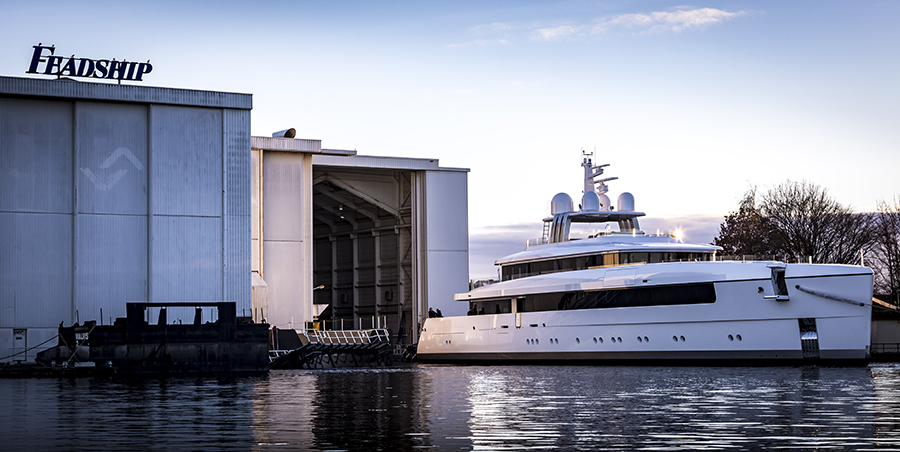 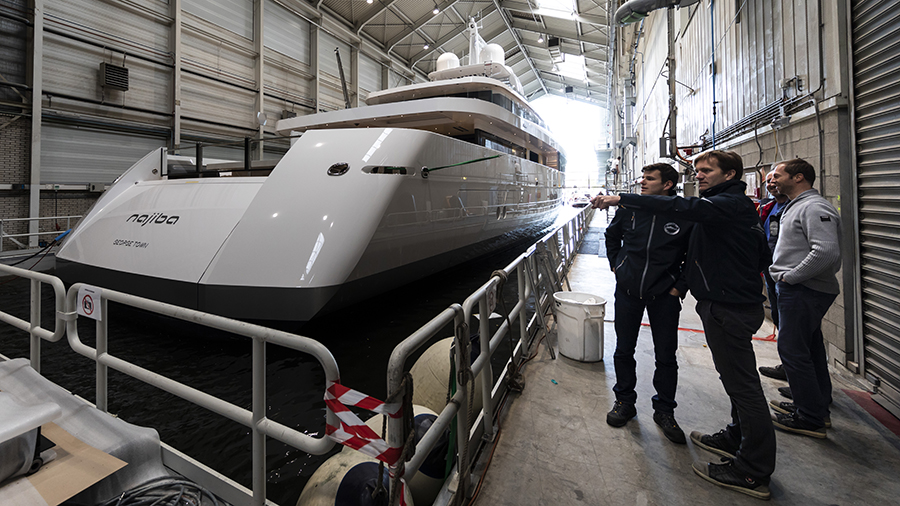 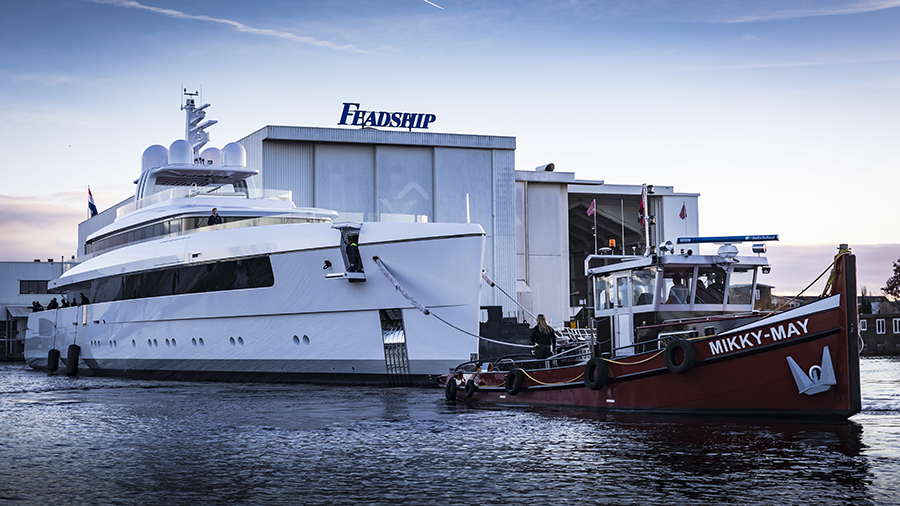 In true Feadship style, 2019 started on a high for the Dutch shipyard as M/Y Najiba was launched from the Aalsmeer facility on 3rd January. Like all Feadships, the new 57m caused a stir as it emerged from the yard, but Najiba in particular is an interesting project of firsts, with new collaborative parties in the design and build team.

Acting as the client’s eyes and ears throughout the process, Peter Wilson, co-founder of MCM, acted as the owner’s representative for the duration of the project. And, not only was this his first Feadship project, it was also MCM’s largest motoryacht project to date.

Designed by Vitruvius Yachts, the motoryacht branch of Philippe Briand’s design authority, Najiba is also the first Feadship project for Briand and his team, who were selected based on their approach to architecture and design as well as the studio’s European influence in design. Once the owner had requested Vitruvius Yachts to design the vessel, the studio went about tracking down the right owner’s representative for the job.

“We were contacted by Philippe Briand’s office, who said they had a client wanting to build a 58m Vitruvius and that he was looking for an owner’s representative,” says Wilson. “Of course, we saw this is a great opportunity to be involved in a really special project. We presented an initial proposal and followed up with some direct dialogue with the client by phone. That first phase went extremely well and during a subsequent meeting at the client’s office, MCM was signed up to get the project to the shipyard contract stage.”

MCM then went on to manage the shipyard selection process, which landed with Feadship, and then guided the owners through the process of contract negotiations and specifications. “Once the contract with the shipyard had been signed, we could move on to the second phase of our relationship with the owners, which was to represent their interests throughout the construction process until the delivery scheduled for mid-March,” explains Wilson.

Armed with years of experience, the owners of Najiba were clear and exact in what they wanted for the custom project, which upon completion will be their third superyacht. The owners have been described by Wilson as ‘extremely knowledgeable’, driving a large amount of the exterior details and the yacht’s interior.

The owners understood very well that a perfect yacht requires a strong scientific and architectural approach to support the exterior design. At Vitruvius, we believe that architecture is the link between art and science.

“The owners understood very well that a perfect yacht requires a strong scientific and architectural approach to support the exterior design,” says Philippe Briand, founder of Vitruvius Yachts. “At Vitruvius, we believe that architecture is the link between art and science. Art is also present in the clean and pure exterior lines, and the way the interior design by Christian Liaigre plays dramatically with the wood and immaculate white surfaces to transport you into what feels like a whitewashed villa on the beach.

Once the initial general arrangement and planning phase was complete, Studio Liaigre were the commissioned to take on the yacht’s interior styling, which features a series of woods dramatically placed alongside immaculate white surfaces throughout the interior. “With ‘hands-off’ owners we sometimes find ourselves having to make personal decisions for them, which is not ideal,” says Wilson. “Some clients just want to be called when the job is done; others want to be involved in every nut, bolt and door handle, but I have no doubt which is the more rewarding. We had multiple meetings with the owners of Najiba at the Vitruvius office in London, the Liaigre studio in Paris, the shipyard in Holland, the Monaco Yacht Show - to name a few of the venues. Everyone was always very focused, and they were always very interesting and enjoyable.”

While MCM’s remit predominantly revolves within the sailing yacht sphere, the team has managed the construction of several motoryacht projects including 31m Cassiopeia and 42.4m Calliope at Holland Jachtbouw.

“Both sailing and motoryachts have engines and generators, AC and audio-visual systems, and so on,” says Wilson. “The difference is that on a sailing yacht we have to squeeze it all into a weird shaped hull. Then we add masts, rigging, sails and winches and heel it over at 25 degrees and shake it all about! The owners found that a pretty compelling reason to take us on for his own yacht.”

Najiba is now going through a period of final outfitting and tailing, prior to her delivery, which is scheduled for the middle of March 2019.