Life in the fast lane

Brian Benjamin's vision as a product designer and entrepreneur led to the delivery of the award-winning 25.1m Aegir II and to his starting Carbon Ocean Yachts, the U.S. yard that will build its successors…

Brian Benjamin's vision as a product designer and entrepreneur led to the delivery of the award-winning 25.1m Aegir II and to his starting Carbon Ocean Yachts, the U.S. yard that will build its successors

Brian Benjamin had a simple idea: Can you make a racing boat with a superyacht interior? The answer is, yes, you can.

Aegir II, the 25.1m fast cruiser he had built in the U.S. North East has gone on to win races, accolades, design awards and admirers, indicating that Benjamin's product intuition extends into yachting from his former businesses in residential plumbing and heating.

Aegir II's luxury interiors feature hand-stitched leather, a top-shelf AV system, marble bathrooms and skylights
A keen sailor, Benjamin knew exactly what he wanted, and the key to his design idea was carbon construction. “When everything is lighter, you put as much ballast as you can in the thing," he said. "That gives you sea weather performance, stability, and lets you put more sails up. And that allows you to go faster,” he says. “We’ve got 46 per cent stability factor. So our righting moment is enormous. When you hang the yacht on each side it goes vertical in seconds. Not that we’ve ever done that, of course."

“There’s not much R&D going on, as far as I can see, in yacht development. Where’s the product development? And there’s not much volume. So even these factory-built products aren’t products like you and I would expect. They’re just semi-customs, really. So you end up with a lot of yachts that are not very well tested. Almost every one is a one-off, isn’t it? And that’s why they have such a high failure rate, because most of them are prototypes.”

Benjamin’s team designed four hulls at 120th scale and took them to Southampton University for a month. Testing them at different speeds, validating the CFD data, they were working to get the hull right. “Everybody asked, ‘Why are you so confident it’s going to work?’ And I said, ‘Well, we’ve got more sail area than anybody else, we’ve got higher displacement levels than anybody else, we’re lighter than everybody else, and we’ve already validated all the numbers.’”

Typically 45 per cent of the yacht’s weight is in the keel, providing improved stability, safety, acceleration and top speed, and providing Aegir II or her future sisters speed and excellent upwind sailing abilities.
His initial build at a reputable, capable yard in the U.S. North East was halted when the yard went under in the turmoil of 2008, leaving Benjamin out of pocket and a half-built boat that he didn’t own in a yard that needed to pay its creditors. With much wrangling, he got the project back on track. After considering a series of yards around the world to carry on the project, Benjamin eventually started Carbon Ocean Yachts in Bristol, Rhode Island, picking up some of the best shipwrights in the area.

Brian Benjamin
“I didn’t want to build boats; I just wanted to buy one. I didn’t want to design boats; I just wanted to buy one,” he says. “The fact was I couldn’t buy the one I wanted so I had to design and build my own. “The whole idea of what we’re trying to do with Carbon Ocean Yachts is not screw the owner, basically, because the bloke who set this up is a screwed owner. We’re not going to pretend that we have the money to build these things when we don’t. We’re not going to expose our next owner to massive great risk. So when we get an order, we’ll build a yacht.”

Read all about the Carbon Ocean 82, Aegir II and Brian Benjamin's vision for owners and superyachts in Issue 5 of The Superyacht Owner.

Aegir II is built of prepreg carbon to a design by Rogers Yacht Design. Benjamin actively encourages clients to be involved both conceptually and during the build process to develop a customised style for the interior. 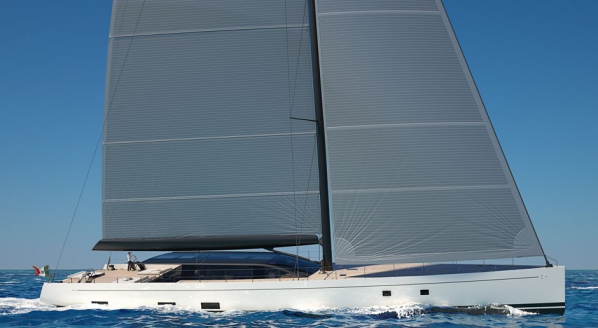