In April, Captain Dave Evans decided to pause his superyacht career and join the motor conservation yacht Sharpie, one of the two Sea Shepherd Conservation Society vessels fighting against illegal fishing and defending the highly-endangered vaquita porpoise in the Gulf of California, Mexico. Having been one of the most effective Sea Shepherd campaigns to date, Operation Milagro IV is now complete and Captain Evans can reflect on his time in command of a different kind of vessel.

The vaquita population is under serious threat of extinction from the illegal gill net fishing of the totoaba fish, which kills vaquita in the process. Sea Shepherd started its net removal initiative back in January 2016, and since then has maintained a presence in the Upper Gulf of California almost year-round. Since the Milagro campaigns began work in the area, its fleet has removed 808 pieces of fishing gear, saving over 3,000 animals –  the Sea of Cortez is one of the most biologically diverse bodies of water in the world, and these efforts also help to protect a wide variety of species that live there as well as the vaquita. It is clear that, without Sea Shepherd’s intervention, the vaquita would not still be alive today. 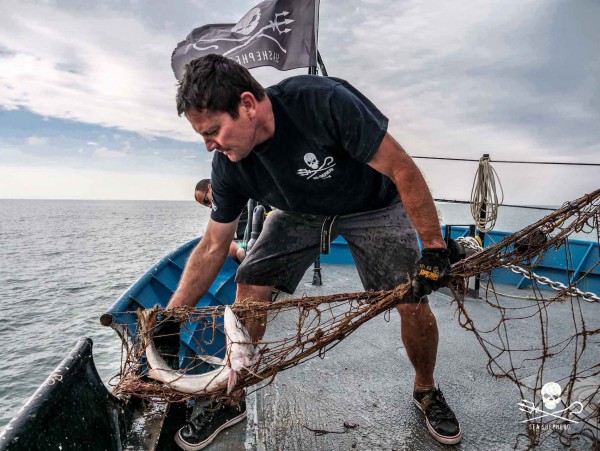 Captain Evans’ decision to join Sea Shepherd came about fairly naturally. “I know I am not alone in noticing more plastic in the seas, more rubbish on beaches, and less sea life in the oceans,” he explains. “My daughter regularly enjoys the beach cleans in Mallorca organised by Asociación Ondine and, as she has grown, we have started to talk about the oceans and the animals in it, with her asking me why no-one was protecting them. Out of the mouths of babes comes wisdom, they say, and from there the steps were simple. From looking on the Sea Shepherd website, I figured out it was time for me to volunteer, and I was privileged to be given command of the Sharpie and join the hard-working team in Milagro IV.”

“The Sharpie has a clear purpose and it is important to understand that and fit in with the crew, rather than bring in my own ideas."

During Operation Milagro IV, the fleet was able to remove more fishing gear than all previous Milagro campaigns combined – that’s 385 deadly pieces of illegal fishing gear removed from the Upper Gulf and 854 animals saved. “The Milagro Campaign has defined borders and this makes it a fairly unique situation in that we have a very defined protected area that we are patrolling,” Captain Evans explains. “Having two vessels running also makes a difference, as the illegal poachers watch our location and if Sharpie is in port due to logistics, weather or any other reason, they will be quick to exploit this and attempt to retrieve their nets in search of the highly-lucrative swim bladders of the totoaba.”

The experience gained from the last four campaigns has also made a significant difference to the overall success of this particular camptaign. “We are able to capitalise on this experience and knowledge to ensure that we are not wasting time and fuel on the search patterns, and are actively pulling in nets more often,” adds Captain Evans. “Utilising radar and keeping a constant eye on sonar while running a tight search grid really changes our game. Essentially, we are learning to fish for nets and have now improved our technique to the point where we are really making an impact on illegal fishing in this beautiful part of the ocean. The fact that we are working with both the Marines and PROFEPA personnel who also help us pull in nets and then process the illegal nets so they are not reusable – while staying aboard Sharpie for our protection and in case of conflict – is also part of this effectiveness and the cooperation really works.” 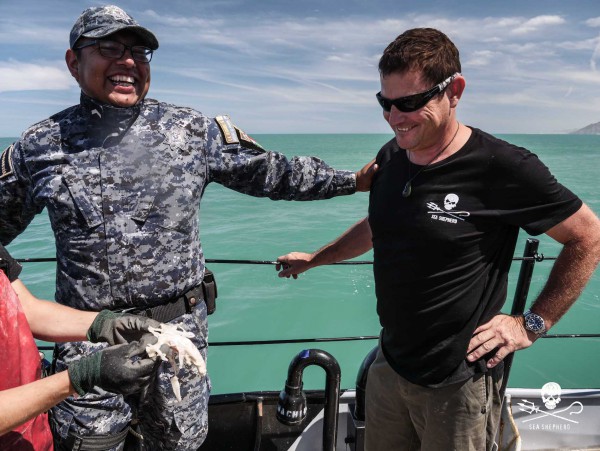 Reflecting on his time in command of the Sharpie, Captain Evans has found some positive differences compared to his captaincy on board superyachts. “The Sharpie has a clear purpose and it is important to understand that and fit in with the crew, rather than bring in my own ideas,” he explains. “They know how to hook these nets and bring them aboard safely, and all aboard care for our common cause. The crew work hard and with gusto for long periods and the feeling you get when, as a team, you save many animals caught in the poachers’ nets is amazing, particularly when you have experienced the lows of when we arrive too late and see the carcasses of the totoaba or some other by-catch trapped in their nets. It is great to pull off a flawless yacht charter, but the amazing feeling we get from the work we do here has got that beat by an ocean mile!”

"It is great to pull off a flawless yacht charter, but the amazing feeling we get from the work we do here has got that beat by an ocean mile!”

Since his time aboard the Sharpie, Captain Evans has also gained a better perspective on what more can be done by the superyacht industry to protect the oceans. “It is amazing what a little ripple can do: marinas need to install sea bins; boats need to reduce plastic use; harmful chemicals used aboard that may enter the water should be changed for alternative green solutions; and pressure needs to be put on shore suppliers to reduce packaging and utilise green shipping methods,” he concludes. “Ultimately, superyachting is a luxury industry, but that should not mean the World’s oceans suffer as a result of our reluctance or neglect to implement changes that would be beneficial to all of us on the Blue Planet.”