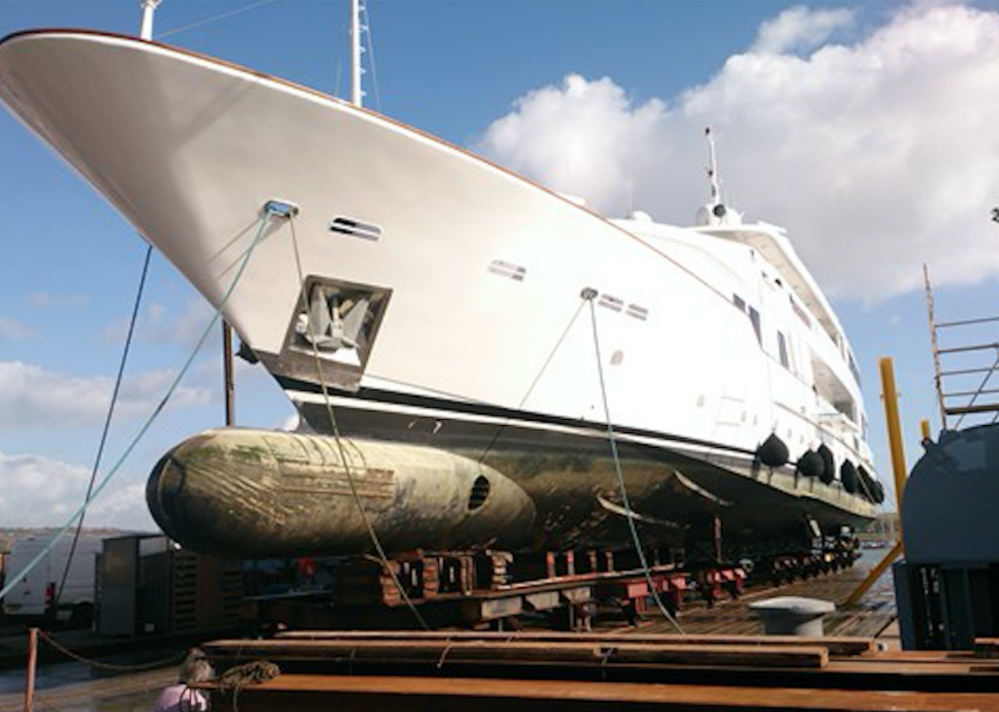 Trafalgar Wharf Shipyard and Trafalgar Wharf Group have undertaken a comprehensive corporate rebranding and are now known as Trafalgar Shipyard, part of The Trafalgar Group. Now operational as a shipyard, drystack, marina and storage and yacht club, the rebranding consists of a new name, new slogan and a new focus for the company.

The group’s new slogan, ‘More Time Out’, is representative of their efforts to ensure superyachts spend more time out on the water and less time in the yard. This not only signifies an evolution of the brand, but could arguably be seen as a strategic step in engaging with the next generation of clients, who will inevitably expect faster turnaround times from shipyards as a generation used to the ‘on demand’ lifestyle.

Jonny Boys, managing director at The Trafalgar Group, has launched a new model for Trafalgar Shipyard, whereby owners can bring in their own repair and refit teams in order to extinguish additional costs or mark-up. “I’ve taken the shipyard back in house,” said Boys. “Owners want to get the best price and quality from subcontractors. The best way to do that is competitive tendering. There are not many shipyards where you can bring in your own independent teams, but owners want choice and the control that brings and unrivalled flexibility through the project.

“Once a yacht is in dock, you can’t just move it if things aren’t going well,” continued Boys, “but when you hire the shipyard only, it’s easy to make changes if a contractor isn’t performing. That’s unrivalled flexibility.”

“Once a yacht is in dock, you can’t just move it if things aren’t going well, but when you hire the shipyard only, it’s easy to make changes if a contractor isn’t performing. That’s unrivalled flexibility.”

Boys brought in the experienced dockmaster, Chris Hems, to ensure owners receive “the best service possible, can dock within circa 90mins and start work on their yachts,” according to the shipyard. Hems has reportedly carried out more than 300 haul outs and dockings for the US Army, Testbank Ship Repair and Burgess Marine, as well as working in partnerships with Wightlink car ferries and Brittany Ferries Normandie Express at the 4000t Syncrolift in Cherbourg.

“We’ve got all the facilities owners need,” said Hems. “We’re a 24 hour safe, secure, working facility with on-site workshops, mess rooms and office space available to hire. We’re also very clear in our pricing structure so owners know what they are getting.”

The shipyard has reported a “successful period of growth” with several superyachts in the yard, such as M/Y Shemara, M/Y Lady A, M/Y Bystander, M/Y Force India, M/Y Tacanua, M/Y Coi-Koy, M/Y Senses and M/Y Spada. In addition, they have welcomed TS Royalist, TS John Jerwood and TS Jack Petchy to the shipyard, as well as a regular client base of Wightlink, Gosport Ferries and Serco who dock many of the Portsmouth Naval Dockyard support ships.

The yard welcomes vessels with a maximum LOA of 60m, 14m beam, and 4.5m draught. The permissible limit using the docking cradle is 877 tons, although the facility suggests that it can take more depending on the vessel’s configuration.

At this year’s edition of The Superyacht Forum (18th – 20th November), we will be discussing the needs and demands of the next generation of clients, such as the adjustments above carried out by The Trafalgar Group, as well as the increasing importance of the refit sector. Join the discussion here.

The future of Planet Superyacht