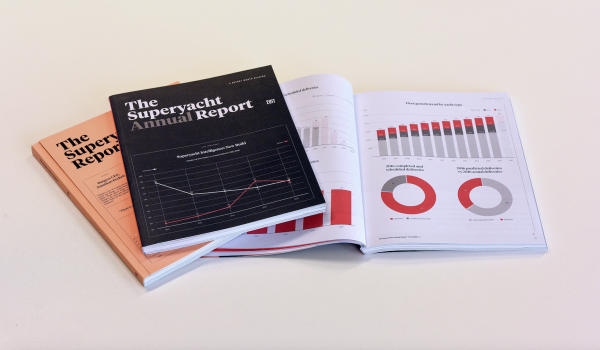 Through verifying the activity of every shipyard building above 30m, The Superyacht Annual Report 2017’s ‘The Shipyard Report’ provides the market’s clearest insight into every yard’s in-build fleet, its record of deliveries between 2012 and 2016, and its subsequent position within the global shipyard ranking table.

“In line with its aggressive acquisition model, the vastly expanded Palumbo Group has bolstered its global position by 24 places.”

A shipyard’s activity fluctuates incrementally when based on units delivered, so the ranking system focuses on a five-year window to give a more accurate appraisal of consistency and performance – and caters more precisely for the yards delivering larger vessels that may be under construction for four or more years, requiring substantially more labour than production building, while also acknowledging the prolific nature of the production platform.

“Despite delivering 1.2 times the output of its nearest rival in terms of units, Benetti still managed to be placed 14th in our rankings based on the average LOA of units delivered in 2016 (46.3m).”

The ranking system offers context to what can be a confusing marketplace. Plotting a yard’s performance over this extended timeline also identifies those that have busy order books and are operating at full capacity – some may have delivered more in 2016 than any other year since 2012 and appear to be very busy. However, such heightened activity could belie a sudden dearth of orders, triggering pricing adjustments. A ranking system identifies those that are consistently busy and those that may be considered ‘one-hit wonders’.

“Feadship has delivered 9.5 per cent more meterage than Lürssen since 2012, but has done so in the form of nearly twice as many vessels – 21 to Lürssen’s 11.”

Fluctuations within our top 10 have been incremental, and these leading shipyards continue to dominate the market. Towards the back end of the top 40, however, there are very significant changes to the positions, and new entries and exits.

Which shipyards are the backbone of the superyacht industry’s future? Find out by ordering your copy of The Superyacht Annual Report 2017, here.