The British Superyacht Report out now

When asked to consider the world’s most famous superyacht hubs, the United Kingdom rarely finds itself at the top of anyone’s list. However, while the UK may not boast anywhere near as many superyacht visitors as the likes of Monaco, the French Riviera and Italy, it can still claim to be one of the industry’s major markets. While it is frequently overlooked, the market consists of far more than new build numbers, berthed vessels and excessive amounts of rosé; it’s lawyers, brokers, insurers, suppliers, designers, financiers, regulators and much in between. When one considers these factors, the UK fast becomes one of the world’s central superyacht economies.

For many, insurance represents an unnecessary evil. However, for the few that require it, insurance quickly becomes their best friend. In recent years the insurance market in London has been put under pressure by the increasingly large number of insurers from the commercial maritime markets that saw the superyacht industry and a means to balance their books. As a result, superyacht insurance premiums fell to an all-time low, deductibles were reduced, extra coverage was added to policies and brokers commissions increased. Indeed, premiums full to such unsustainably low levels that a number of businesses were forced to exit the market. In the business section of The British Superyacht Report we speak to a number of the insurance market’s top providers in order to determine how and why the market is correcting.

Elsewhere in the business section The Superyacht Report speaks to four of the UK’s top shipyards in the ‘South Coast UK shipbuilding report’. Sunseeker, Princess, Oyster and Pendennis discuss various developments and explore what makes their enterprises so vital to local communities. 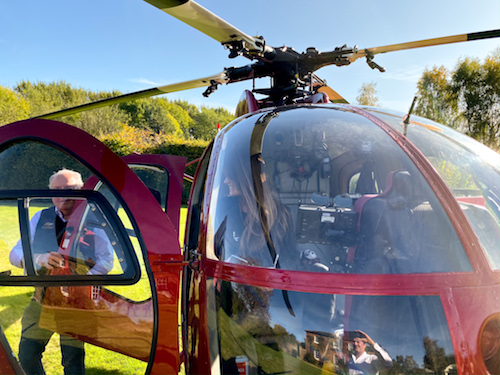 Georgia Boscawen takes to the skies with Tony Castro

In ‘British eccentricity – and its strong influence on global luxury’, John Leonida, partner at Clyde & Co, and Helen Brocklebank, CEO of Walpole (the official sector body for British luxury) discuss a number of Britain’s idiosyncrasies and how they have led to the small island nation punching well above its weight in the world of luxury.

“British film, television, literature and art are renowned the world over and amplify the appeal of British luxury and its cultural impact,” explains Brocklebank. “British luxury is all about creativity, inventiveness, craftsmanship and quality. However, these characteristics are inextricably linked to Britain’s locations, eccentricity and humour. All these qualities are embodied in an amazing single-malt scotch or a Johnstons of Elgin coat, and I believe that British-made superyachts fall within that. There is a kind of brand aura that Britishness has and it gives an extra flavour to our luxury goods.”

As well as exploring the best of Britain, the issue’s design special provides the opportunity for some of the world’s most respected designers and design studios to present the best and brightest of their latest creations. In two unique interviews, Georgia Boscawen sits down with Mick Leach in the New Forest to hear about his journey to the top of the superyacht design game and takes to the skies with Tony Castro to discuss his mesmerising career. Furthermore, within The Fleet Report, we identify two predominant geographical sectors within superyacht design and explore the dynamic among the British and Italian design schools.

Sunseeker to build in aluminium and steel at Pendennis