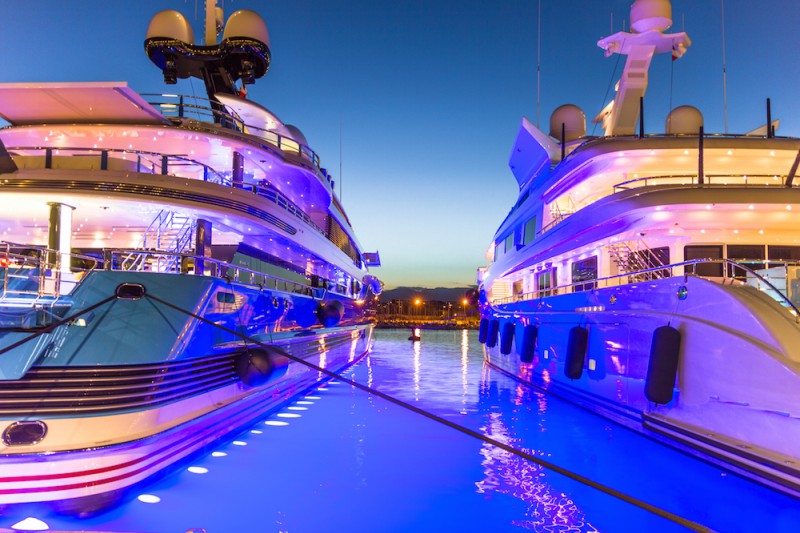 I regret that my entrepreneurship days are over, but there is an opportunity for an enterprising businessman to start up a service that is sorely needed. What we need is an international organisation that can bring some sense to the problem and reduce the hassle associated with superyacht berths.

In the old days, we would need a huge room in London or New York where ambitious young men wearing badges and with phones stuck perpetually in their ears could scream at each other throughout the working day, and then collapse in a bar and get drunk each evening due to the stress of broking superyacht berths instead of pork belly futures. But today we can do the same thing and do it better, thanks to computers, the web and “The Cloud”.

The problem to be addressed is this:

Today a captain requiring a berth in, say, Majorca, must telephone six or seven marinas until he finds one with a spare berth. If the owner’s plans change and he decides to go to Ibiza instead, the rare berth that cost the captain so much hassle may be left empty, while another captain has to go through the same brutal procedure and may be unsuccessful in finding a berth in Majorca for his own yacht due to no one knowing about the change of the first captain’s plans.

The marina manager of, say, Port Canto in Cannes may be looking out of his office onto empty berths while, three and a half miles away, superyachts are forced to drop anchor off Golfe Juan after their captains had spent many fruitless hours trying to find a vacancy in Port Gallice, Port Camille Rayon and Antibes. This is particularly likely with marinas such as La Napoule with only one or two berths for large yachts. Who would bother calling them in the hope of the unlikely event of a vacancy?

If booking.com can do it for hotels, surely it should be easy for someone to set up a database accessible to marina managers and captains that could automate the process of finding berths. It could probably be integrated into the marinas’ own occupation, booking and billing systems, so once it is set up no additional effort would be required in the port management offices to make it work.

Some portals like Portbooker.com have tried to make a start but so far they only seem to offer a list of possible ports. They have not yet made the vital step of offering occupancy forecasts, neither do they allow online booking with the simplicity of, say, buying an airline ticket, a service that shares most of the computational challenges of the required superyacht berth booking system.

By the time you take into account the value of (discreet) adverts, membership fees from yachts and marinas and a tiny percentage of a huge number of berthing fees, the entrepreneurs who get this going will soon be able to afford a yacht of their own and then, of course, they will be doubly glad the system is there.

With the characteristics of his vessel already available on the web, the captain would only need to specify the dates the berth is required and the general area of operation and the programme would then provide a list of berthing options and their costs, including perhaps those which might require a change of location part way through if the requested stay is for a long period. In the same way that rooms are often made available for selection on the web by the best managed hotels, or seat selection on a plane, so the captain could even select his preferred berth out of the ones on offer.

This would work particularly well for privately owned berths which generally do not get into the normal berth-booking process, or which are put to the back of the list of places on offer simply because the port makes more money filling their own berths first.

It does not take a leap of imagination to see how free market principles could be added to the system. In the same way that Uber and Easyjet modify prices depending on supply and demand, so a highly requested berth at a popular time of the year could automatically attract a premium based on a similar algorithm. And of course it goes without saying that a captain would be looking at up-to-date information as data would be instantaneously updated while he watches his monitor. An efficient market will theoretically provide the maximum returns for the berth holder and the minimum cost for the berth renter. Plus, of course, allow informed decision-making.

The only people who would be likely to oppose this scheme are the harbourmasters who regard the encouragements offered by some captains when requesting a berth as an essential part of their salary. A transparent, automatic system, particularly when integrated with an automatic billing and payment system would leave no opportunity for it.

The system would need to be international and there would only be room for a single global operator, but whoever sets it up is assured of a millionaire’s income as well as the heartfelt thanks of the entire superyacht community. By the time you take into account the value of (discreet) adverts, membership fees from yachts and marinas and a tiny percentage of a huge number of berthing fees, the entrepreneurs who get this going will soon be able to afford a yacht of their own and then, of course, they will be doubly glad the system is there.

Read Martin H. Redmayne's article, to which the above was a response, here.

No room at the inn

More than just a pretty space