Sanlorenzo has announced that is has filed an application with Borsa Italiana, the Italian stock exchange, for the admission to listing of its original shares on the Mercato Telematico Azionario, which is managed by Borsa Italiana. In conjunction with the listing, Sanlorenzo has prepared the prospectus, which has been filed with Consob, the regulating authority for the Italian financial markets, for approval.

The free float required for the purposes of the Listing will be realized through a private placement (the “Offering”) reserved for qualified investors in Italy and institutional investors abroad pursuant to Regulation S of the United States Securities Act of 1933, as subsequently amended, and, in the United States of America, limited to Qualified Institutional Buyers pursuant to Rule 144A of the Securities Act, with the exclusion of those countries, specifically Australia, Japan and Canada, where the Offering is not permitted without specific authorisation of the relevant authorities, in accordance with applicable laws or by way of exception to such provisions.

The Offering will be subject to market conditions and to the receipt of the authorisation to the admission to listing by Borsa Italiana and to the approval of the Prospectus by Consob. The Offering is currently expected to be launched in 2019.

The Offering will comprise: (i) newly issued shares resulting from a capital increase with the exclusion of pre-emptive rights (the "Capital Increase") and (ii) existing shares owned by Holding Happy Life S.r.l. (the "Selling Shareholder" or “HHL”), majority shareholder of the Company and controlled by Mr. Massimo Perotti, Executive Chairman of the Company, with the objective to meet the free float requirements of Borsa Italiana for the STAR segment.

As of the date of this announcement, it is expected that the Offering, including the Greenshoe option – a clause used during an IPO wherein the underwriters get to buy an additional 15% of the company's shares at the offering price – will be up to 35% of Sanlorenzo’s share capital.

Proceeds deriving from the Capital Increase are intended to be used by the Company mainly to foster and accelerate its future growth and to seize market opportunities. After the Offering the Company expects to have a broadly debt free capital structure. 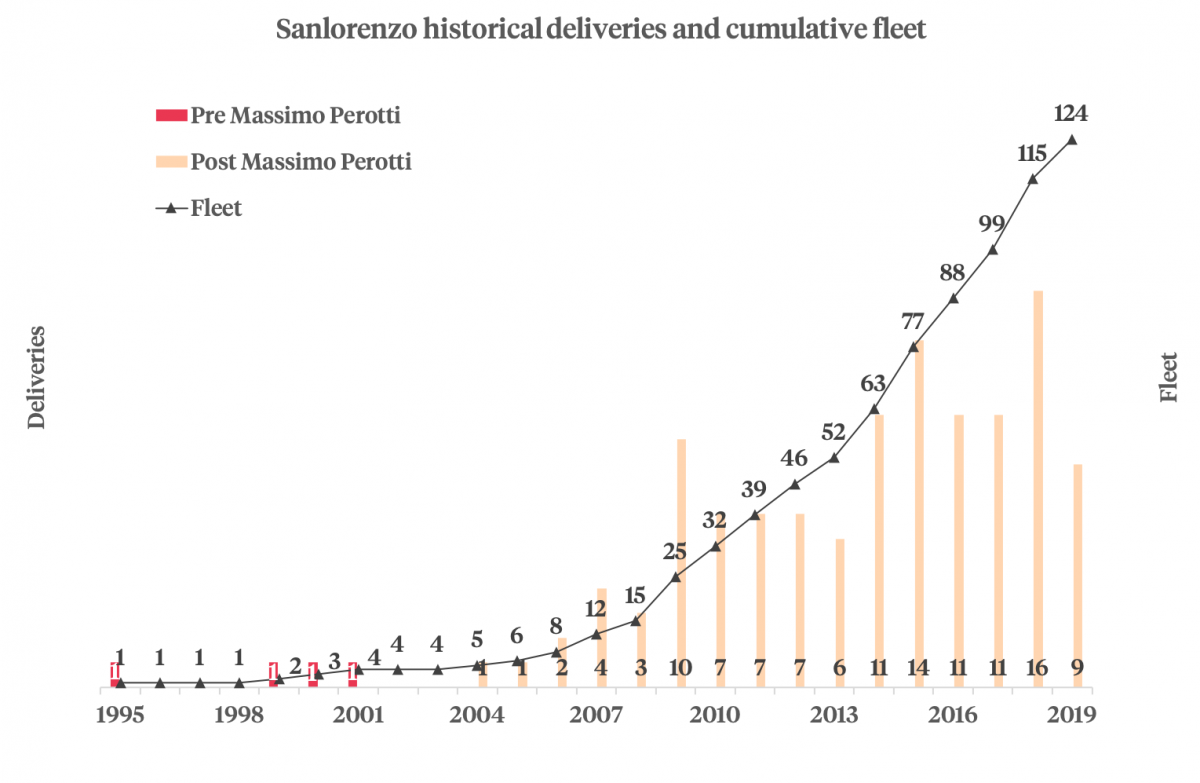 Graph courtesy of The Superyacht Agency

According to The Superyacht Agency, Sanlorenzo was delivering less than one 30m-plus a year in the years leading up to 2004. In 2004, however, Massimo Perotti, CEO of Sunseeker, joined the business and in the years that followed Sanlorenzo has experienced a period of exponential growth. It is hoped that with floating on the stock exchange, this will aid Sanlorenzo in its ambitious growth strategy.