After filing for bankruptcy, criminal proceedings and five failed auctions, the Italian shipyard has been sold… 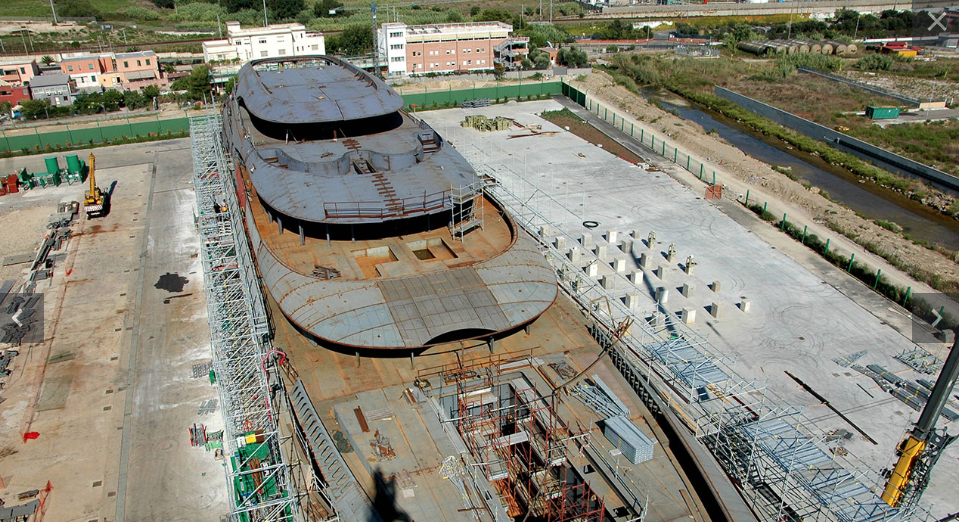 In 2015, Privilege Yard, which encompasses 12 hectares of land granted by the Port of Civitavecchia, Italy, filed for bankruptcy and the production of its 127m motoryacht, Project One, ground to a halt. It was argued at the time that the yard had been created as a vehicle for the illegal pooling of funds gathered from a variety of banks and the subsequent distribution of these funds to various senior individuals at the yard. It was today announced, following five failed attempts to auction the shipyard, that Privilege Yard has been bought for €6,016,000.

In August 2016, Mario La Via, CEO of Privilege Yard, and Antonio Baptist, Privilege’s only board member, were placed under house arrest by the public prosecutor of Civitavecchia pending charges relating to fraudulent bankruptcy, a falsified balance sheet, tax crimes and the contravention of anti-mafia legislation. Those reported at the time as suspected beneficiaries included Tarcisio Bertone, the former Vatican secretary of state, Mari Baldassarri, a former member of the Italian parliament and Pasqualino, president of the Civitavecchia Port Authority.

According to Ezio Vannucci, partner at Moores Rowland Partners, after five auctions, within which no bids were submitted at the initial appraisal value of €95million (including shipyards and yacht), on 30 July, Royalton Investment Holding was awarded the auction of Caintere Navale Privilege Yard (excluding the yacht under construction) for the reduced price of €6,016,000 through an Italian subsidiary Konig srl. The sale of the yard and its assets was confirmed on 22 October.

Royalton Investments Holding, with its office in Malta led by CEO James Frangi, is active in the boating industry through a Greek company based in Athens, London, Beirut and Miami called SSH Maritime. SSH is active within the superyacht sector and its fleet includes superyachts such as 83m O’mega, 86m Chakra and 72m Serenity.

Royalton, through another company within the group, Marine Goddess srl, had already secured ownership of the 127m hull under construction at Privilege Yard. The purchase of the yard was completed yesterday in Rome in the presence of the Privilege Yards bankruptcy curator and the legal representative of Konig srl, Dr Alfredo Longo, assisted by Dr Ezio Vannucci and Vito Parenti.

Dave Christensen passes away at 87