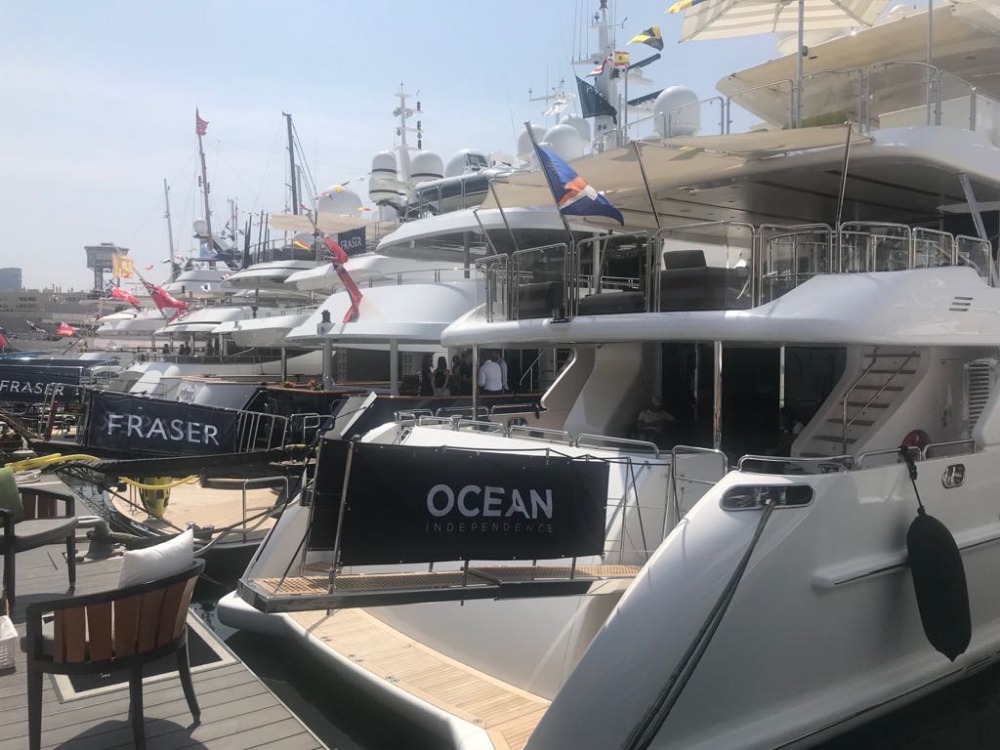 At the first MYBA Charter Show in Barcelona last year, Toby Maclaurin, commercial director of Ocean Independence and a former president of MYBA aired concerns about over-commercialising the yachting business and damaging its allure by heaping bureaucracy on superyacht owners. His primary apprehension at the time was the introduction of the charter transport contract as an alternative to the existing rental contract for tackling progressively stringent market conditions.

“One year on from its introduction, I’m thrilled to say that the take-up on the contract has been very low,” extols Maclaurin during an exclusive conversation with SuperyachtNews at this year’s show. “It’s had very little impact on our business because it’s overly complicated and overly commercial. Some owners have asked about it and when we’ve shown it to them, their common sense has dictated that it’s not a contract they want to commit to.” Thus, Ocean Independence, which has one of the largest charter fleets in the market, has not set itself up to use the contract.

Maclaurin explains that the companies that have tried using it have had to bend the rules to make it work, because it’s simply not the right fit for the luxury yachting sector. “Instead, we should be holding up our hands and saying, ‘Look guys, we’re not commercial, so we need contracts that are unique to the superyacht industry’,” he adds.

Maclaurin has just been voted onto the MYBA board as the ‘tax and law’ representative and his goals, undoubtedly, are to unshackle superyachts from excessive commercial obligations and abridge the jurisdictional requirements for transient, commercially-operated yachts. “I’m very passionate about enforcing a European approach to superyachting so that there is an approach that is fair for everyone, but it’s difficult to know who to lobby too.

"By trying to stop the Turkish and Croatian gulets from entering its waters, Greece has stopped the free movement of superyachts and really shot itself in the foot."

“We made a certain amount of progress with the European boating industry, which is a European body, but what we’ve got to do is get support from MYBA, LYBRA, SYBAss and our partners in Spain, France, Italy, Croatia, and hopefully Greece, and make a solid argument.”

Other than the “big EU project”, Greece closing its doors to non-EU charter yachts is a primary concern for Maclaurin, but one that is already on track to being repealed, he says. “By trying to stop the Turkish and Croatian gulets from entering its waters, Greece has stopped the free movement of superyachts and really shot itself in the foot.

“Now, charterers transiting Greece have to start and end outside its borders – and the only way around that is that if you are EU-flagged you can apply for a Greek license, which is a bit of a joke in itself because if you ask anybody where the application form for this is, you’ll find that it doesn’t actually exist! There are people who think they have navigated around the system, but then, is an owner with a largely international crew going to abide by the rules and hire a majority Greek crew for charters, just to cruise in the area? I’d think not.”

The light at the end of the tunnel, Maclaurin says, is that through the MYBA representative increase, there have been some constructive conversations with the Ministry, which are ongoing, about a simple and more transparent Greek charter license. “I don’t think it’s wrong that Greece charges for a charter license, and why shouldn’t you charge VAT on charters in Greek waters, provided it’s done fairly and proportionately.”

“For once, we need to work with the authorities, rather than constantly trying to outfox them like this is some sort of game.”

“I’m thrilled about the resurgence of ‘yachts engaged in trade’,” Maclaurin continues. “We are private yachts that engage in trade – it’s exactly as it says on the tin. They’ve said ‘yes’ in France, and it’s a work in progress in Italy, and now we need to roll it out in other jurisdictions because it totally makes sense. All that paperwork you have to do, flipping between private and commercial, is just the industry being disingenuous.”

As Maclaurin points out, this initiative is not “lowering the standards”; yachts still have to be charter code compliant with their flag states and maintain high safety standards. The difference is that yachts don’t have the commercial vessel registration stamp and the stringent requirements that come with it.

All in all, Maclaurin says there is foreseeable “changing of the guard”. He is very optimistic that the new board has the right objectives to deliver a less commercial-focused – and simplified – operational environment for superyachts. However, as he points out: “For once, we need to work with the authorities, rather than constantly trying to outfox them like this is some sort of game.”