Following an engine malfunction on board Bennetti's 52m superyacht Latitude, SuperyachtNews speaks to the motoryacht's captain about exactly what happened on board.… 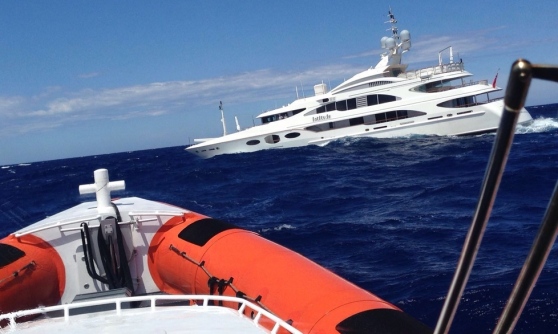 Benetti’s 52m Latitude is in good health following an engine malfunction while the motoryacht was at sea. An image has surfaced on social media depicting the superyacht seemingly sinking on the Strait of Bonifacio, however the vessel’s captain has confirmed that all is now well with the yacht and its crew.

“We had one engine go, and were escorted across the shipping lanes by the coastguard as a precaution, due to only having one engine,” Captain Paul Bickley tells SuperyachtNews. “Lloyd’s, the Cayman Islands and our insurers were notified and dispensation was given to allow Latitude to return to Antibes to carry out the necessary engine repairs.”

Captain Bickley took the time to confirm misleading reports from other publications, namely that there were no guests on board at the time of the incident, and that a tug was not needed, nor used. “No tugs were required, and the return passage to Antibes went as planned,” says Captain Bickley.

While everything on board the 52 motoryacht, now happily berthed in Antibes, is back to normal, there is one thing at which the captain remains somewhat confused. “What surprises me was the fact that the Italian Coast Guard took a photo of us, and then somehow various other websites got hold of it” – a question that raises the concerns of privacy when information is in the hands of regulatory bodies.

A bad week for superyacht safety

Captain Paul Bickley: why I mentor my crew