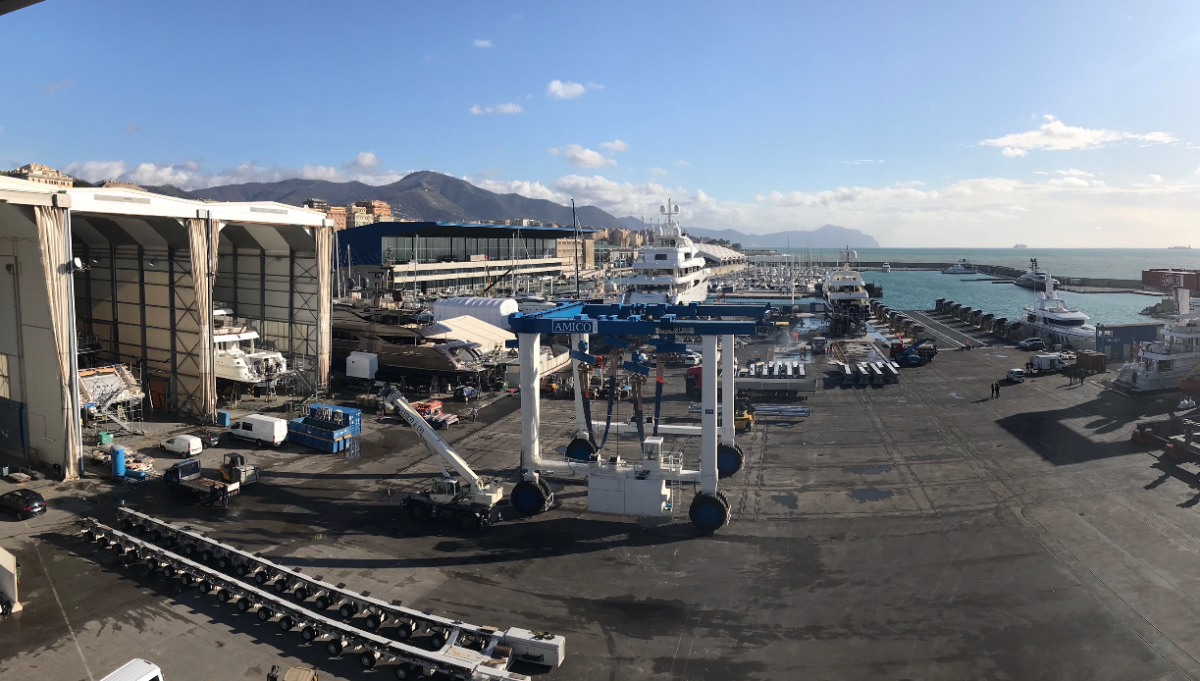 Italian refit behemoth, Amico & Co. has cemented its position at the top of the superyacht refit sector, with the inauguration of its new 4000t ShipLift.

The symbolic opening of the lift, which in practice has already lifted three yachts at the time of writing, confirms the Genoese company’s accession to a level alongside MB92, with Genova and Barcelona now representing and elite axis of specialist refit infrastructure without compare.

Speaking at a press conference to mark the occasion, Chairman Alberto Amico said: “This is a particularly significant development [in the national context] because it is the largest lift in Italy...but also as an international infrastructure landmark.

“It is particularly interesting to note that the engineering side of the realisation of the ShipLift was totally bespoke and the involvement of the Amico & Co. team in its design was [pivotal].”

This development rockets the yard’s haul-out capability from 65m and 835t to, “95 metres and the capacity to work on five or six very large vessels at the same time on the hard standing”, Mr Amico said. He added the yard now has nine projects won thanks to the ShipLift, whereas before, the number would be limited to two because of haul-out restrictions.

Indeed, the custom-designed construction was delivered as one unit, by sea from Treviso, where it had been constructed by Scandiuzzi.

What is particularly notable about this system is the track and trestle system which allows yachts to be moved around a grid system across the hard standing area, ensuring large yachts can be completely lifted in the space of two hours, while capacity can be managed acutely.

Even this system required the reconstruction and reinforcement of 25,000sqm of hard-standing, at a depth of 25m, and all while the shipyard remained operative. Somewhat remarkably, it was only in July and August 2019 that the yard had to cease operations. 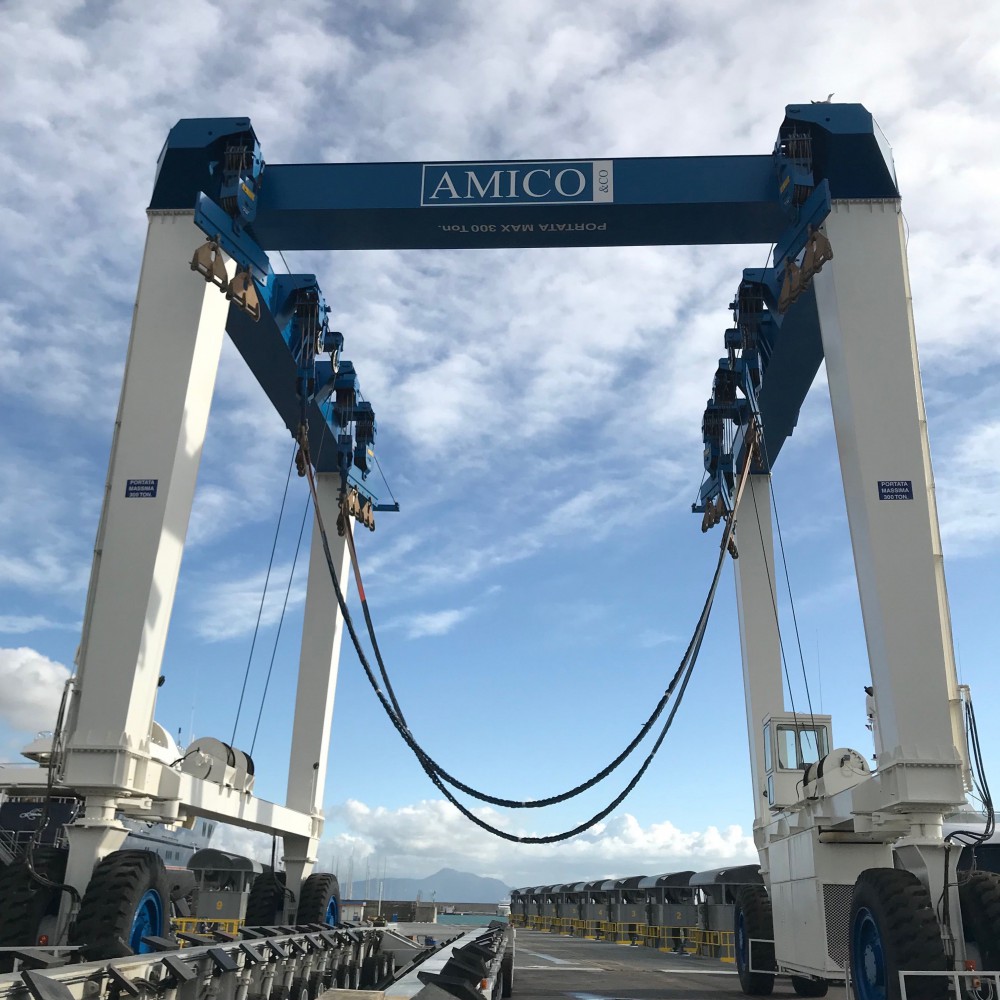 Fabrizio Scardigno, project manager for the ShipLift project, explained: “We built a series of [underground] technical tunnels to provide services to these rather large yachts...such as shore power, fresh water, grey water... these had to be built underground, so we did not create any problems with the facilities above ground.”

The construction of the lift has taken just 16 months, and allows six yachts up to 95m to be worked on at any one time - bolstering the yard’s capacity to c. 35 vessels simultaneously. The investment has totalled €27 million, including a €4 million grant from the national government, as well as a €13 million subsidised loan, with the company financing the remainder.

Managing Director, Bruno Guglielmini, said the fund application process had been complex, but ultimately fruitful. “These are normally the sort of investments made by port authorities, but this is being done by a private company.

“When you reach a milestone like this, it is always important to look around and acknowledge those who have helped you. In particular, we acknowledge the Port Authority, who have shown us ever more trust in the projects we have realised. These are build projects that are destined to stand the test of time and come with [future] concessions. Here, we have created a [public-private] model that is unusual, but a virtuous model.”

The project is a working example of the efforts made by Amico, as part of Genova For Yachting, to forge a mutually beneficial public-private strategy for capitalising on the economic impact of visiting yachts and their crew.

For the ShipLift alone, a total of 83 Italian companies were contracted at various points of the project. “The investments you see are based on a model where we can offer to clients, not just the infrastructure, but a skilled workforce”, Mr Amico said. “Consider on a 40- or 50-metre, you have 20 people on board, when you go to 80- or 90-metres you have 100 [or more]... In total there are 100 people directly employed by the company, with another 50 working for other companies within the shipyard and exclusively for Amico & Co. at the height of the refit season, this figure can double, but it doubles in a very stable way.”

“When you reach a milestone like this, it is always important to look around and acknowledge those who have helped you."

In a compelling development, Guglielmini went on to reveal that the public-private collaboration will continue, with Amico & Co. awarded the concession to develop the adjacent Darsena Nautica marina space, which is already home to the Genoa boat show, and represents a gateway to the shipyard.

The industry appears alive to the emergent marina-shipyard business model, which increasingly appears to usurp the ‘marina as a destination’ concept of yore.

This completely new development, “is necessary to provide a whole host of services to owners, crews and managers of large superyachts when they are in the Genova area”, Guglielmini explained. “Not just in terms of their refit activities, but their marina activities, and this is an activity that benefits the entire economic prosperity of the city, with a spend ratio of one to three in the territory while they are here, while the economic relationship between refit activity and spend is actually one to 10.”

Amico & Co. will invest €6 million in the space, pending final approval from the Western Ligurian Sea Port Authority, and works will take place from January 2020, in six-month phases that can accommodate the ongoing September boat show. The result will be 35 berths for yachts up to 110m, as well as rejuvenated shoreside services and power provisions.

“It’s a matter of hosting large yachts in Genova”, Mr Amico explained. “Its all part of a strategy of establishing Genova as a referenced superyacht hub around the world. It’s particularly important to have this relationship with other companies operating in this territory, in this very specialised sector, so we can create a critical mass that makes Genova a very attractive destination for large yachts.”