SuperyachtNews.com - Business - In conversation with Roberto Giorgi and Raphael Sauleau 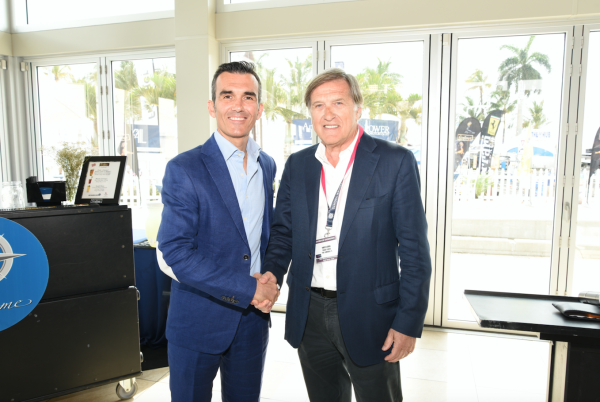 It’s been little over a year since Roberto Giorgi, executive chairman of Fraser Yachts, introduced the company’s new CEO, Raphael Sauleau, at the 2016 Palm Beach International Boat Show. And it is fair to say, his visionary modernisations – both subtle and palpable – to the firm’s anatomy, are apparent.

“Our action plan of branding, working on a new technology system and on the company structure, have all followed through,” began Sauleau. “Now we’re developing new technology for our commercial force, which will be finished this year and will be a big step in how we handle business and communicate.”

Giorgi added: “The strategies we formulated some years ago have been implemented. Our mission was to start being more involved in the 80m-plus market – our strength previously has been 30–60m – and we’re attracting the CAs of bigger boats and the management of some very big boats, which is tangible proof that we’re doing something correctly.”

Sauleau and Giorgi want to sustain market share in Fraser’s current sector, but garner greater visibility in the larger yacht sector, saying there are ‘many benefits’ to this – mainly, ‘exposure’.

But the two do have concerns over the potential bursting of the current economic bubble they see growing. This, set against a backdrop of a proliferation of brokers – “the slices of the cake are getting smaller,” Sauleau says – and the complete absence of barriers to market entry.

“The stock market went up on expectation, but I’m scared for the economy,” Giorgi continued. “I’m worried we’re going to have a version of the market that doesn’t match reality and a bubble is created. It’s the people who are buying boats on emotion and then their stocks are affected; that’s worrying.”

Sauleau believes the Fraser business structure – which he compares to Camper & Nicholsons’ – of approximately 50 per cent staff and 50 per cent independent contractors, is the most secure framework for market lulls, however. And that the ‘salaried’ structure is more susceptible to being “keeled over by overheads”.

With regards to markets for the future, Sauleau said he believes the few Asian clients who are buying yachts are appearing to buy yachts in the US. Giorgi, former president of VShips, added: “Asia will become, potentially, the biggest market in the world. But just to give you an idea of the time it takes, at VShips, in the cruise market, we invested in Asia in 1996, and only over the last two years have companies started making money.

“It’s a long process, but now all cruise vessels are being built for that market; Carnival Cruise, Royal Caribbean and Norwegian Cruise Line [NCL]. The cruise market used to move vessels from Europe or America to Asia and just expect them to work – the food, the entertainment, the deck space – but they didn’t.”

Alluding to an example, Giorgi spoke of the recently launched NCL vessel, Norwegian Joy, a cruise-liner that is purpose-built for the Asian market. The yacht offers Chinese styling, cuisine and on board experiences – such as a go-kart track on the top deck – to cater for the subtleties and preferences of Chinese culture.

“We can learn a lot from other markets,” Sauleau concluded. “But in ours, you will only add value today if you are consistent, honourable and able to visualise client requirements. The days of just showing a nice boat are over – today, you must have the ‘know-how’.”

“Start with the right platform and maintain it”

Careering after a fair market value

What is the value of a broker–designer partnership?