Shipyards and brokers remain undecided over shows in China after the Hainan Rendez-Vous changes hands and its former organiser proposes a new option. … 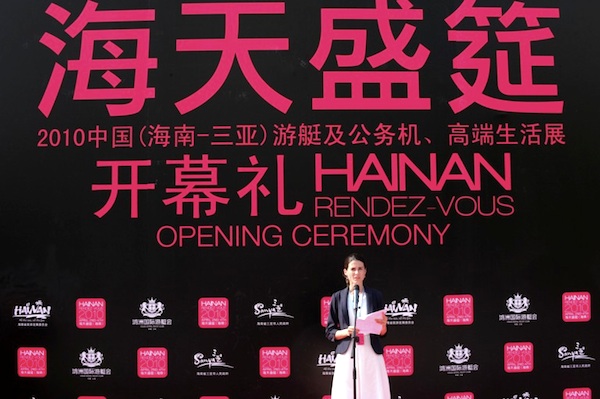 Delphine Lignieres, managing director of China Rendez-Vous Ltd. and founder of the Hainan Rendez-Vous is working to establish a new superyacht and luxury market show in China after Wang Dafu’s Visun Group announced it had taken over her former business. But key industry associations and leading show clients have yet to decide where they will invest in China in 2014.

Lignieres, who was the original developer of the Hainan Rendezvous and is understood to have the interests of the superyacht industry at heart, is taking legal action against Visun group. “The reality is the event has been hijacked more than ‘acquired.’ Our copyrights have been blatantly breached,” she told SuperyachtNews.com. “We are now creating another format elsewhere in order to adapt to the new reality of the market—something we planned even before Mr. Wang made his announcement.”

According to members of SYBAss, who asked not to be named, Lignieres is lobbying for SYBAss’ support in developing a new show in Hong Kong or Macau. Hong Hong remains highly popular with China’s UHNW population, even as the new political mood in Beijing has lent a restrained tone to their proclivities. But as Western-based exhibitors seek to plan their investment in China’s increasingly numerous and competing boat shows, Lignieres’ highly anticipated proposal will give yacht builders, designers and brokers yet another option.

Lamberto Tacoli of the Italian shipyard CRN, part of the Ferretti Group which is owned by the Chinese firm SHIG-Weichai, does not yet know where they will exhibit next year, but hopes the options become clear. “We cannot allow the development of new boatshows in China to the point where we have them once a month,” Tacoli says. “If somebody asked me three years ago are you going to a boat show in China, I would have said no. Now we are attending three boat shows in China: Shanghai, Hainan and Guangzhou. There’s also Singapore and now possibly Hong Kong or Macau. For the superyacht market, we need to be strategic and focus our efforts on one, or maximum two boat shows in greater China. We can’t be everywhere.”

The concern at the moment is ensuring that the money invested in the last couple of years into promoting the superyacht lifestyle in China does not evaporate.

–––
Chinese businessman Wang Dafu’s Visun Group took over the name and marketing of the Hainan Rendez-Vous in a sudden move after the 2013 show, to the surprise of many in the superyacht industry. “It’s part of doing business in China,” said a source familiar with what happened, but who asked not to be named. “Ms. Lignieres will develop something new. We’ll wait to see what she can put together before we decide where we will go.”

Still, there is scepticism that Hong Kong presents a viable alternative to the Hainan Visun Yacht Maria. One shipyard director said, “we still haven't finally decided [which show we will attend]. I haven't seen the proposal from [Ms. Lignieres] but I understand it may be in Hong Kong; if so then most likely we will stay with Visun—but as I say info too sketchy at the moment!”

Western superyacht industry investment in greater China has been increasing year on year as the global economy forges a slow recovery, and yacht builders, brokers and designers are keen to establish a stable beachhead, a Chinese equivalent to the Monaco Yacht Show, from which they can reliably and consistently attract serious buyers.

Theo Hooning, secretary general of the Superyacht Builders’ Association (SYBAss) says his members have not yet committed to a particular show. “It is just too early to make any decision as the options are not yet clear,” Hooning says. “The main concern at the moment is ensuring that the money invested in the last couple of years into promoting the superyacht lifestyle in China does not evaporate. A proper continuation of the industry’s efforts in the Far East is what is requested by the industry.”