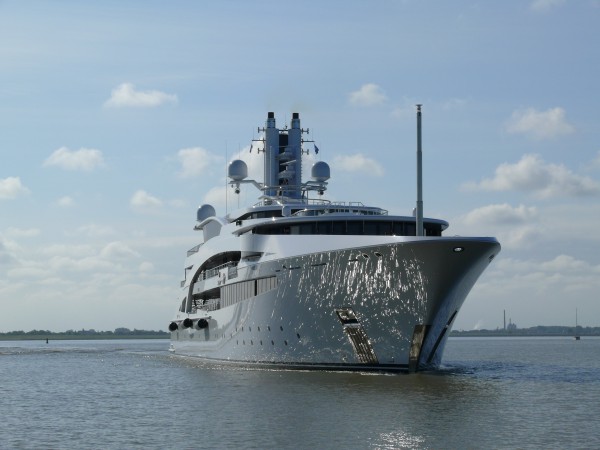 In September 2017, GYG, the superyacht painting, supply and maintenance group, comprising Pinmar, Rolling Stock, ACA marine (acquired in March 2017), Pinmar Supply and Techno Craft, announced its maiden unaudited interim results for the six months ending 30 June 2017. On 5 July 2017, GYG began trading on AIM, a market operated by London Stock Exchange. Since being floated on the stock exchange, the group has posted a revenue increase of 19.4 per cent to €33.9 million. At the 2017 Monaco Yacht Show, SuperyachtNews spoke exclusively with Remy Millott, CEO of GYG, about the results and the group’s long-term strategy.

“The AIM market is a platform for fast growing businesses, so we had to demonstrate to the investors that we had an executable growth strategy,” starts Millott. “We had to show what our market share was, where that was in terms of the market and what the opportunity for the group is. At present our global market share is 17 per cent, comprising a 30 per cent share in the refit market and a five per cent share in the global new-build market. Our new build market share is obviously larger if you only take into account the 80m+ superyachts which is where we mainly operate in this sector.”

According to Millott, the central tenet of GYG’s long-term growth strategy is to increase its presence in the new-build market and, with the global fleet continuing to grow in terms of units year on year (at an average of 3.14 per cent annually since 2012, according to The Superyacht Annual Report: New Build), and with the average size in the vessels continuing to increase, Millott believes that GYG is well placed, more so than its competitors, to account for this growth. Millott also believes that, in order to work on the world’s largest projects, by successfully floating on the stock exchange GYG is able to prove its financial security and enhanced credibility to potential new-build suitors within a market that has traditionally been dominated by the large new-build shipyards.

“If you are a superyacht owner with a 50m vessel and 10-12 crew, it is easy enough to deal with numerous small suppliers and companies because the entire process is easy to manage,” he says. “However, when the vessel is nearer 100m, or over, the costs, and therefore the risks, are much larger and the owner requires a business to be financially secure. The world’s most discerning owners are looking for stable, or growing, businesses that can honour contracts and warranties. In these instances, the client does not want to deal with a variety of subcontractors – they want a single central contractor that can take a project to completion. GYG is able to provide this.”

The methodology that GYG will employ in order to improve its new-build market share, most notably within the large-superyacht sphere, is to create an increasingly strong network of partnerships. However, Millott is eager to highlight that the group’s desire to work on the world’s largest and most advanced projects by no means signals a move away from working on superyachts of all sizes and, with the average size of vessels growing globally, semi-custom and production builders will become increasingly viable partners for GYG.

“For us it is about fostering relationships and creating strong partnerships by identifying those businesses that want to move forward with us, innovate, advance technically and offer a higher quality. That is where we are currently and, once we have those partners on board, we will continue to invest in facilities and commit to aiding in the growth of the industry, within both the new-build and refit sectors,” continues Millott. “It is crucial that the market understands that just because we have become a listed company and are looking to grow, it does not detract from how important each client is to us. We remain focussed on each and every project, regardless of size.”

Pinmar, a subsidiary of GYG, is one of the headline sponsors for The Superyacht Forum 2017, held in Amsterdam 13-16 November. At the event, Remy Millott, CEO of GYG plc and Stephen Murphy, the Non-Executive Chairman, will take to the stage with fellow leading figures in the industry as part of a session in the Investor’s Summit, to discuss the Initial Public Offering (IPO). Pinmar will also introduce its new 2.0 Paint Standard and lead a workshop on electrostatic paint spraying. Click here to get your ticket.