Competitive bunkering and improved infrastructure is putting Gibraltar increasingly on the map.… 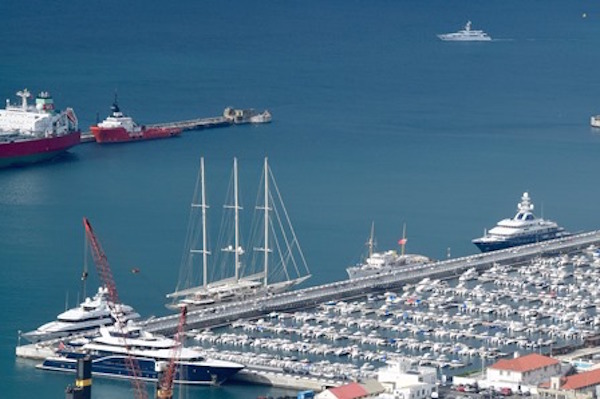 The Gibraltar Port Authority has announced a record number of superyachts stopping in Gibraltar. This weekend in particular saw a total of twenty superyachts calling in at Gibraltar as the crossing season from the Mediterranean to the Caribbean reaches its peak.

At one point, nineteen yachts were recorded either alongside one of the berths at the new Mid-Harbour Marina, the commercial harbour, a private marina or in the anchorage.

“The new berths at Mid Harbours, improved infrastructure, competitively priced fuel, and a concerted marketing effort in this niche sector are clearly placing Gibraltar firmly on the superyacht map,” commented CEO and Captain of the Port Bob Sanguinetti.

The recent addition of over 500m of deep water berths at Mid-Harbour Marina has been instrumental in allowing the Port Authority to cater for increased LOA. Local surveyor, Captain Ed Geary, has also confirmed to SuperyachtNews that there has been a noticeable increase in superyachts calling in Gibraltar this season.

“Gibraltar is blessed with being positioned mid-way on the milk run between the Med and the Caribbean, so yachts are taking advantage of economical fuel priced at around 0.47 pence a litre, as opposed to around 1.40 euros per litre in Spain,” he explains.

“As well as Gibraltar’s growing provisioning facilities, the safe and secure moorings available at Ocean Village and Marina Bay provide a wide range of infrastructure for superyachts to stopover for as long as they may need.”

With competitive VAT-free bunkering and amenable provisioning and infrastructure options, Gibraltar is a perfect example of a destination that has catered well for superyachts, and is reaping the rewards as a result.