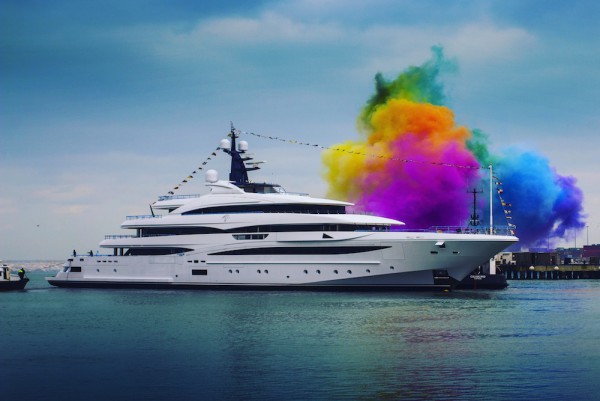 At an event in Milan, Ferretti Group, spearheaded by CEO Alberto Galassi, announced its financial results for 2016 and the results of the group’s first quarter of 2017. In 2016 Ferretti Group registered a consolidated production value of €562.5 million, a 36 per cent increase on the €414.8 million posted in 2015. This market performance also outstrips the projected figure of €556 million that was announced at the beginning of 2016.

"In a three-year period, Ferretti Group proved to be a company able to accomplish a real turn around, obtaining great commercial success, which led to well above expected financial results” comments Galassi, CEO of Ferretti Group. “The new models have become the most important drivers of growth thanks to their design, quality and high standards of innovation, which made them objects of desire since their debut."

Ferretti Group’s EBITDA (earnings before interest, tax, depreciation and amortization), already in positive figures in the first quarter of 2016, surpassed the €50 million mark by the end of the year, reaching €52.7 million compared to the €7 million from the previous year.

"I’m particularly proud to have led the Group to double-digit net results: profit which the shareholders, Weichai Group and Mr. Piero Ferrari, who never stop supporting the Group, have decided to wholly re-invest in the company,” continues Galassi. “The objectives for 2017 are challenging, but possible to achieve as we can rely on further investments on an efficient and well performing organisation and on nine news products that Ferretti Group is ready to present to the market.”

The reality of reaching its ambitious targets for 2017 was made all the more likely after posting positive result for the first quarter of this year. As of 31 March, Ferretti Group’s production value was €145.8 million euros, with an EBITDA of €11.3 million for the same period and profit of over €4 million.

Ferretti Group also announced that it will be investing €46.4 million, €25 million of which will be dedicated to research and development with a further €21.4 million dedicated to the growth of Ferretti Group’s production capacity. Additionally, Ferretti Group plans to move the construction of all Custom Line models to its facility in Marche, enabling the Ancona yard to focus on building maxi fibreglass planning vessels.

Much ado about Brexit