How a coup, supposed revolutionary and an evangelical Christian affected the superyacht market… 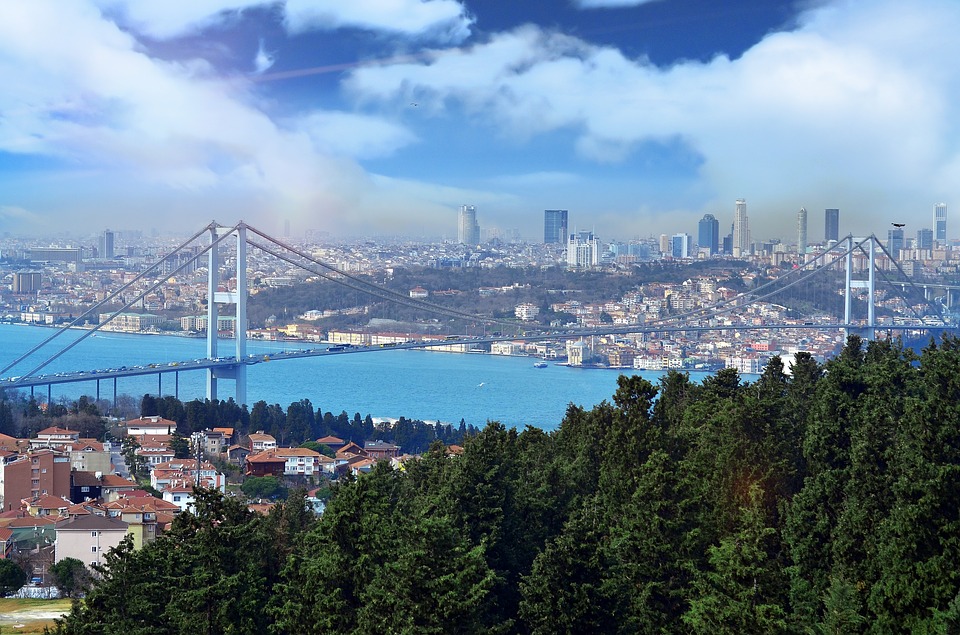 On 15 July 2016 an attempted coup d’etat began in Turkey to overthrow state institutions and oust the president, Recep Tayyip Erdogan. The failed coup, according to Erdogan, was masterminded by Fethullah Gülen, an exiled Turkish businessmen and cleric that resides in Pennsylvania, US. Gülen’s residency in the US has been a constant source of tension between the US and Turkey, with the latter believing that Gülen should be extradited to face judgement in Turkey. The political standoff that has followed has exacerbated the falling value of the Turkish Lira and caused a sudden decrease in value of the currency against the euro and dollar, thus making superyacht building in Turkey tourism an attractive proposition.

In October 2016, in the aftermath of the attempted coup, Andrew Brunson, an evangelical Christian pastor from the US who has been living in Turkey for a number of years, was arrested on terrorism and espionage charges. Brunson has maintained his innocence ever since his conviction. The US claims that Brunson’s imprisonment is unjust and suggested that Brunson was charged in response to the failed attempts to extradite Gülen in what the Financial Times has described as “tit for tat hostage situation”. 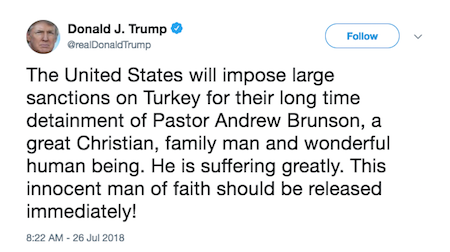 ·      1 August – US announces sanctions against Turkish interior and justice ministers.
·      10 August – Trump doubled tariffs on Turkish steel and aluminium, amounting to 50 per cent and 20 per cent respectively (see below). As a result, the Lira drops around 16 per cent of its value in a day to a low of seven against the dollar on Monday. 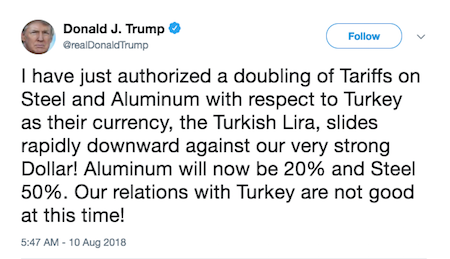 In the days since 10 August the Lira has rallied following intervention from the Turkish banks regulator, closing at TL6.12 to the dollar at 11.30 today.

“This is very beneficial for us,” starts Mehmet Karabeyoglu, CEO of Turquoise Yachts. “It is not only for us, but in general exports in Turkey will rise and the deficit will decrease because there will be less imports, which Turkey needs. So, we aren’t complaining about the weak currency.

“The majority of the costs associated with building a superyacht at Turquoise, however, are based in euros, and in some cases dollar. But, having said that, the labour costs and a number of the general expenses related to a build are in lira and will, therefore, be significantly less expensive, making building in Turkey a more attractive proposition for owners and potential owners that make their money outside of Turkey.”

Karabeyoglu explains that engines, gear boxes, shaft generators, air conditioning and all manner of essential products are purchased from Europe and the US, so the cost to the client is reflected in their original currencies. Steel and aluminium, he continues, are international commodities and are, therefore, traded in hard currency, i.e currencies that are unlike to fluctuate greatly in value, regardless of their being purchased from Turkey. That being said, labour costs, over heads and myriad other costs are paid for in lira and have, therefore, been greatly affected by the falling lira.

“It is incredibly difficult to put an exact figure on how much of the build price may be affected by a weaker lira,” says Karabeyoglu. “However, along with the labour costs, there are a number of products and utilities that we do purchase locally and I would say that around a third of the vessels cost would be lira based. So, there are significant savings to be had for a savvy owner.”

Karabeyoglu explains that it is very hard to predict what will happen next, but believes that the lira was too strong in the first place. Today the lira closed at 6.96 to the euro, Karabeyoglu hopes that lira will return to around five to the euro and Turkey's new build market will remain competitive. With the fall in lira, Turquoise, a yard that promises northern European quality at lower costs, may present an interesting opportunity for perspective owners.