With Palma Superyacht Show underway, we speak to Anne Sterringa about the growth of the local charter market…

In October 2013, the Spanish government made changes to legislation to include an exemption to the matriculation tax for EU and non-EU flagged yachts commercially operating in Spain. Until then, superyachts intending to operate commercially in Spain were obliged to pay a one-time charge consisting of 12 per cent of the yacht’s value. Not only was this value immensely ambiguous, it was an enormous expense that prevented many superyachts from registering to charter in Spain.

This change in legislation came about as a direct result of many years of lobbying by the various Spanish nautical associations. The associations collectively argued that more revenue could be brought into Spain from the yachting sector by eliminating the tax. While the tax has not been completely abolished, four years after it was modified, the benefits are clear.

Since 2013, the AEGY (Spanish Association of Superyachts) has produced an annual report on the state of the charter market in the Balearics, using the number of charter licences obtained by yachts as a key indicator. Showing significant growth each year, the results for 2017 were presented at the recent ANEN (Asociación National de Empresas Nauticas) conference in Palma. Compiled by Anne Sterringa, senior charter broker at Camper and Nicholsons Spain and a member of the AEGY Board, the report shows dramatic changes in the charter sector between 2013 and 2017. 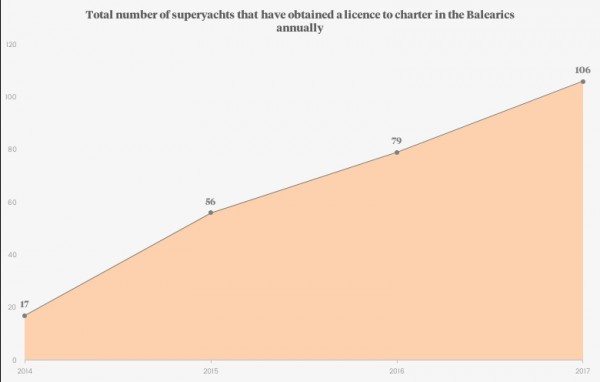 Graph 1: Total number of superyachts obtaining licences to charter in the Balearics annually

Dissected and presented by The Superyacht Intelligence Agency to include only the records for yachts over 30m, the data shows a steady rise in superyachts obtaining charter licences in order to operate in the Balearics over the four years. While these yachts may have registered to charter, it is worth noting that this does not necessarily mean that they did charter in the Balearics. However, it does show interest and intent and thus can be used as a good indicator of the health of the local charter market.

As shown in Graph 1, the number of superyachts registered in 2014 was at a very low total of 17. This could be attributed to the fact that market confidence was still low and many were still hesitant to make charter plans in Spain following the very recent change in legislation. However, confidence has clearly grown year on year as the total number of registered yachts has risen significantly and fairly steadily since then. In 2017, 106 superyachts obtained charter licences in the Balearics, meaning over six times more interest in the region than in 2014. 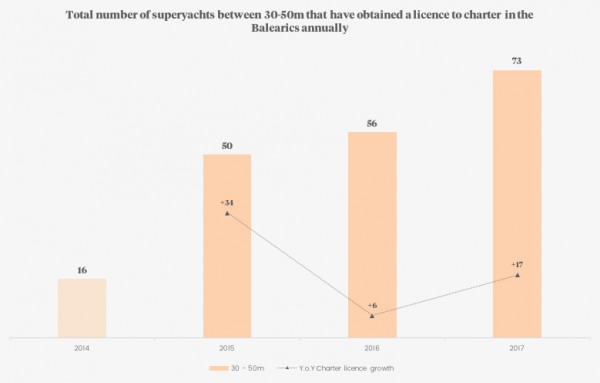 Breaking down the data further into different size categories, we can also see that not only are there more superyachts obtaining charter licences, but that the size of these yachts is gradually increasing. As shown in Graph 2, the number of registered yachts between 30-50m has increased each year. The most significant increase for this size category, however, was between 2014 and 2015, when the year-on-year growth was at its highest with 34 more registrations recorded than the previous year. 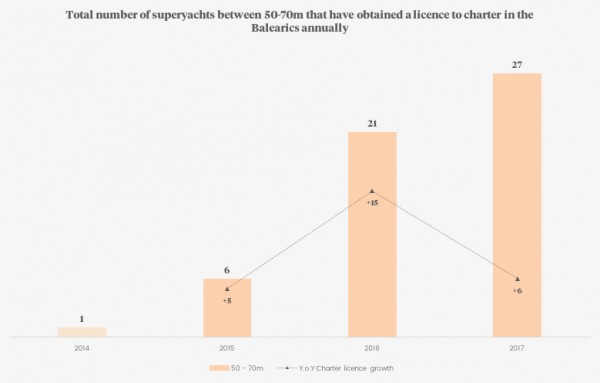 As shown in Graph 3, registrations have also been increasing in the 50-70m size category, but at a smaller ration. The most significant year-on-year growth for this segment occurred between 2015 and 2016, with 15 more registrations than the previous year. In Graph 4, we can also see that historically no yachts between 70-90m obtained charter licences in the Balearics and growth in this size category only started in 2016. The highest year-on-year growth in this segment occurred between 2016 and 2017, with four more yachts in this size range registering than the previous year.

What breaking down the data into size ranges has shown, is that there has been a knock-on effect in terms of the size of yacht interested in chartering in the Balearics. While smaller yachts between 30-50m were quick to obtain licences following the change in legislation, mid-sized yachts between 50-70m didn’t follow the trend until a year later, and large yachts between 70-90m followed suit a year after that. While the Balearic charter market has so far seen the most growth in the 30-50m segment, the data indicates that the trend will continue for larger yachts, but at a smaller scale. 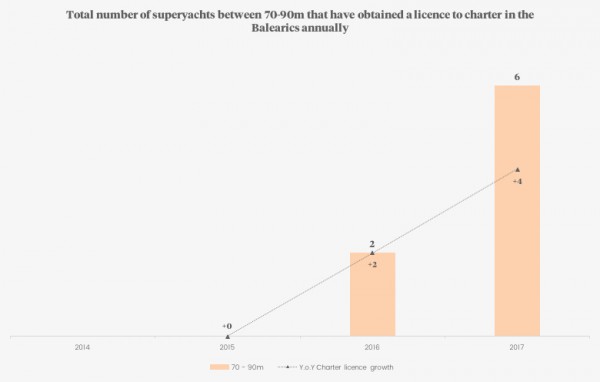 “These extraordinary results clearly demonstrate that the matriculation tax was holding back the growth of the superyacht activity in the Balearics,” explains Sterringa. “Some years ago, superyachts were very wary of visiting Spain due to a lack of clarity surrounding fiscal regulations and the matriculation tax – there has clearly been a change of opinion.”

The report compiled by Sterringa also examines the economic impact of this growth. The findings show, for example, that the amount spent by yachts chartering Balearics on fuel, berths, beverages and food has risen from €991.000 to €11.522 million, which is a direct injection into the local economy. The total amount of VAT collected on charter fees and other costs has risen from €1.179 million to €12.265 million, which is money that the Spanish government would not have otherwise received. Not only have these values increased dramatically because of the number of yachts in the region has increased, but also because the average size of yacht has increased, meaning higher spending and higher charter fees.

These figures are important to highlight to Spanish politicians and use as an incentive to further open up the Balearics to superyachts. While a lot of progress has been made since 2013, Sterringa points out that there is still work to be done. “Spain still has the full VAT rate of 21 per cent on charter, whereas France and Italy have a reduced rate, so in order to compete on the same level as these countries, this needs to change,” comments Sterringa. “Getting rid of the matriculation tax altogether would be another boost for the charter market and the whole process of registering a yacht for charter still needs to be simplified, but this is gradually improving.”

While a lot of progress has been made since 2013, Sterringa points out that there is still work to be done...

And there is hope for more change as, from the local government’s perspective, the desire to attract more yachting business is there. “The Balearic government feels that the superyacht industry creates good quality employment and realises that a strong charter market may mean more yachts stay in the region all year round, which is a top priority in a region where a large percentage of jobs are seasonal,” Sterringa continues. “Politicians understand the numbers and so want to stimulate the industry.”

Apart from the value added to the economy, the higher number of yachts available for charter has also had a positive impact on the Spanish charter market. “The more competition in the region has meant that the standard of maintenance and service has generally improved and is now comparable to the more established charter markets of the south of France and Italy,” Sterringa adds.

While the Balearics are experiencing a period of strong growth, and this is immensely encouraging, the charter market is always changing and boats are always moving – recent events elsewhere in the Mediterranean have highlighted this. The local yachting industry must continue to work with the government in order to keep the region attractive to superyachts.

On board MY 'Heavenly Daze'