Emlyn Jones, managing director of Lizard Yacht Service explains how the system is about more than a clean hull… Exhaust treatment systems are about more than just cleaning hulls and removing the slick from the water. Although for many crew and owners, the primary benefit is the aesthetics, the environmental and performance considerations are significant. One of the few aftermarket systems is SeaClean, a marine diesel generator soot filtration system that uses variable pre-heater technology. SeaClean was first launched at the Fort Lauderdale Boat Show, with the sole distribution rights for Europe now being awarded to Lizard Yacht Services. The first distribution rights to be awarded outside the USA by inventor and product owner, Richard Boggs, who is based in Florida.

The bane of many owners and crew, the black marks left from generator soot are more than just an aesthetic issue. The acidic creation from the exhaust with seawater creates a noxious film that is both unsightly, environmentally harmful, and corrosive to paint. While the clean white hull is a welcome by-product, cleaner and more complete combustion is the real goal. With only a handful of stakeholders in this market, SuperyachtNews speaks with Emlyn Jones, managing director of Lizard Yacht Service, for a more technical perspective on exhaust treatment, and a brief lesson in the technicalities of how this system works.

“Luxury yacht owners want their vessels to be in pristine condition," starts Jones, "...hull staining from the generator exhaust can require cleaning with abrasives. As well as the inconvenience, over time this repetitive cleaning can damage the hull. Diesel engine soot pollution has become a major factor in increased maintenance costs for yachts and other motor vessels."

For a basic overview, Jones explains, “We heat the exhaust from a few hundred degrees to nearly eight or nine hundred." This heating is done with something similar to the heating element of an electric kettle and is powered by drawing down the generator itself.  "Depending on where the boat is," Jones continues "this temperature is then regulated by the control unit (ICU). A boat in the Caribbean vs Antarctica, for example, has differing requirements. The gas then passes through a DPF (Diesel Particulate Filter) and then to the muffler. That’s as technical as it gets.” 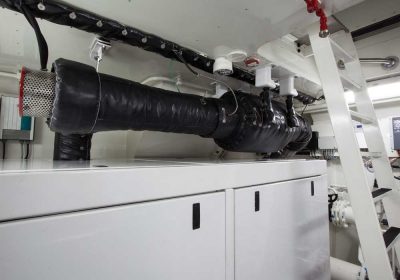 “The ICU is a simple pressure sensor," explains Jones. "Too much pressure and the system increases the temperature to burn more and clear the filter. It is not rocket science, and we have a few boats with the system now that are reporting over 5000 generator hours and the DPF  is only reading around 16%.”

The SeaClean system can also double up as a load bank system keeping the units fully loaded even under light load conditions. This provides a longer life span for the generator as it avoids the glazing of the bores which can occur with underloading.

Using the heating elements that comprise the SeaClean system to draw power from the generator itself, creates its own load bank. Being able to regulate the power output helps maintain the loads on the generators, and therefore the efficiency of the diesel burn. Other systems may employ a secondary load bank system, hence Jones stresses the advantage of the SeaClean system incorporating this utility as a downstream benefit of the overall system. 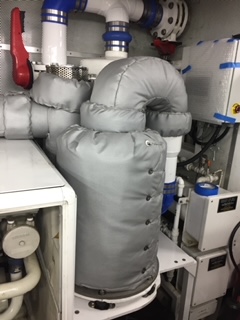 As the IMO Tier 3 regulations loom large over the superyacht sector, Jones explains the role that he sees SeaClean playing. “We can take a Tier Two engine and we make it Tier Three by fitting the system; we have Lloyd's certification on DPF unit. We don't have Lloyd's certification on the pipework because you don't need it. There are other systems, such as Urea injection, but we feel it is too soon for the Marine sector. ”

The Engine room is the heart of the vessels operations, and many look as striking as any of the other focal points of the yacht design. However, reflecting on a recent project, Jones concludes by highlighting some of the engine room shortcomings that may be creeping into the market. “Something that I'm finding a lot of yards are overlooking, not so much the Northern European yards, but certainly some of the new yards, is that they seem to be focussing more on the aesthetics of the boat, and the engine room seems to be an afterthought. So many engineers now that I talk to will say something like;  Oh well, my service side is the port side at the engine and I can't get to it or to do a simple job like putting the flow metre in to check the pipework and everything else because it's all crammed in. This creates issues.”

A route to a greener future

It's raining cats and cats