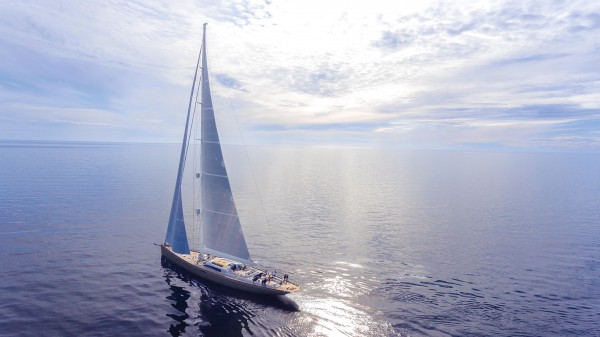 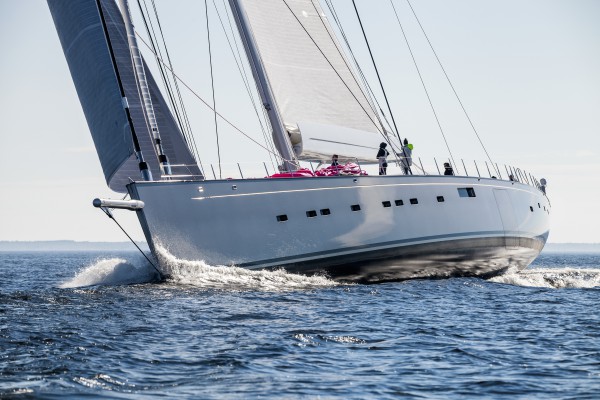 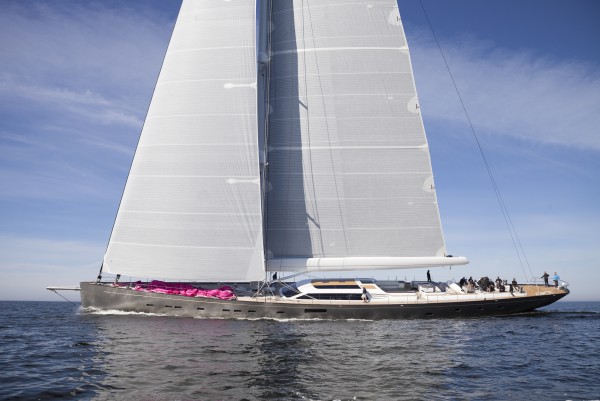 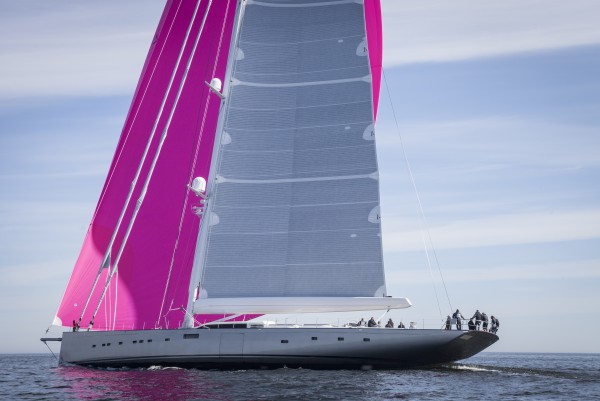 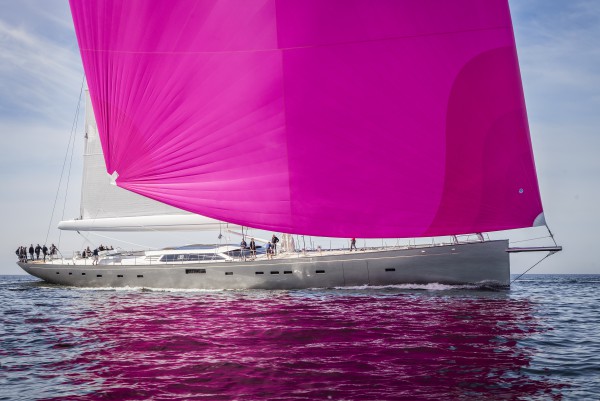 As the largest composite sloop in the world yet launched, there could be few people who would argue that the 53.9m Pink Gin VI is not a strikingly good-looking boat. Her clean sheer from the plumb bow to her aft overhang is redolent of a modern pilot cutter, punctuated by a sleek central saloon coachroof and with a deck layout that feels it has been hewn from a single, giant block. While destined for world cruising, there is little doubt that her Judel/Vrolijk hull will mean swift passage-making, while her Design Unlimited Interior will provide perfect comfort for her highly experienced owner.

But this beauty is not only skin deep. Pink Gin VI has a few surprises that she will give up only when probe further into her nature. She is, for example, the first yacht that Baltic Yachts has specifically built to meet MLC crew space requirements. The result is an aft crew area with prodigious space – and fine finishing, as the yacht’s owner not only chose to continue the main guest interior theme right throughout the boat, but also because he personally enjoys spending time with the crew in the crews’ mess. “Having to pull MLC in,” says Baltic CEO Henry Hawkins, “I guess was more of a challenge for the interiors team and Design Unlimited, but it was certainly something that had to be considered.”

Beyond the crew area, two further challenging elements of construction become apparent – a midships hull door to port that will form the main guest access at anchor (and which is also perfectly placed for delivering victuals to the galley), and a starboard drop-down balcony in the forward owner’s suite. “Originally, my understanding from reading the rules was that the boat had to be able to sail without the doors,” Hawkins explains. “From the very start in-house, we had identified that we needed the doors to form part of the structure of the hull when they were in place.” This was backed up by the structural engineers at composites specialists Gurit, who said that the doors needed to be part of the structure to avoid having to create a massive strengthening structure around the openings.

As a result, Baltic worked closely with classification society DNV GL to clear the designs for construction, a process that Hawkins says was far from straightforward, but for which DNV GL did listen to the case put forward by Batlic, ultimately signing off the design. “It led to finite element analysis and load case analysis developed by Gurit for a worst possible scenario – for example, if a door failed while at anchor,” Hawkins explains.  “Watertight doors would compartmentalise the area so we weren’t so worried about downflooding, but we were worried about the potential for torsion and twisting in the hull – but as long as we cleared the worst possible case then class would be happy. That was a battle, but it was all about talking together, and it was a collaboration with class at that point.”

The other key innovation on Pink Gin VI is the force feedback steering system, whereby a fly-by-wire system is used to link helm to rudders, and sensors transmit data from the rudder back to the wheel so the helm can feel exactly what’s going on Moreover, the system can be tuned for different loadings and for different helmsmen depending on preference for feedback. “The steering was never going to be mechanical,” says Hawkins, “because the loads are too high and the separation between the wheels and the rudder was too far. The choices were either hydraulics with no feeling at all, or we had to develop something with feeling and that’s why we ended up with this system. The challenge was to drag ourselves into the 21st Century with regard to accepting that we could rely on electrics and electronics and not just hydraulics.”

While there was not enough wind on SuperyachtNews’s trial sail in June to really test the system, Hawkins says that the feedback from the crew so far has been brilliant. Moreover, Hawkins himself is starting to have faith in the system after initial worries. “I trust the guys who developed it,” he admits. “We ran scenarios trying to catch them out during the development phase, but they had an answer to everything.”

The interesting question is whether this new system could start a revolution in big-boat steering systems, and it’s something that Hawkins clearly has a lot of belief in. “I know how much it takes to [develop this system and the software to run it],” he says, “and if people want to come to us to supply it then yes, that’s definitely in our long-term. This could be a big game-changer for the bigger boats, but we’re also sure it will scale down quite nicely to smaller yachts, maybe even as far down as 24m. I always dreamed of putting a pedestal on the foredeck and driving the yacht upwind from there – and now there’s nothing to stop us doing that. You can put the wheel wherever you like and you would have that ‘feel’.”

It is clear that this new launch is something a bit special, from her looks to her construction method and to the innovations that are contained within her. It was rather fitting, then, that our trial sail would coincide with Baltic Yachts’ own mini symposium on innovation – watch this space for more on the fascinating topics that came out of those discussions.

Are futuristic concepts the undoing of designers?

At first glance: Baltic 130 'My Song' ready for action