Can superyachts act as salvage vessels? 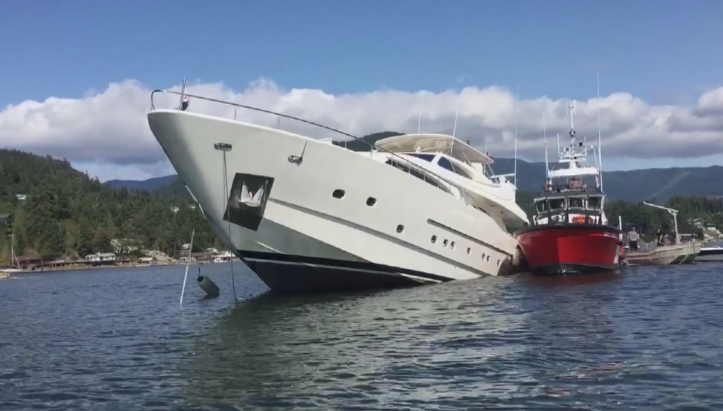 Almost 40 years ago, one of the most harrowing salvage efforts in history unfolded off the western coast of France. On March 16 1978, the supertanker Amoco Cadiz was in a desperate position after suffering a hydraulic failure in its steering gear. This left the 1,096-foot ship mercilessly battered by heavy seas and high winds. To form a mental picture of the ordeal, try to imagine a 234,000-ton tanker pitching so wildly that it would periodically bury its nose in the waves. It must have been a frightening sight.

The salvage tug, Pacific arrived on the scene and court transcripts describe negotiations that took place between the two captains over the use of the Lloyd's Open Form salvage agreement. Despite enormous efforts to take the stricken tanker in tow, it ultimately foundered on Portsall Rocks. As a result of the grounding, the tanker broke apart and devastated the Brittany shoreline with what would be the largest oil spill in history up to that time.

Had the effort been successful, the operators of the commercial tug would have been entitled to bring a salvage claim against the tanker. The concept of salvage goes back to the days of ancient sailing ships. To put things simply, if a salvor (the one doing the rescuing) voluntarily comes to the aid of a vessel in peril and is successful in its efforts, that salvor has a right to a share of the property saved. This principle is supported by maritime case law over the centuries.

The very term “marine salvage” brings to mind powerful commercial vessels more likely to keep company with oil rigs in the North Sea than with Browards and Ferrettis in the boat basins of the French Riviera. One might be inclined to view salvage as the kingdom of powerful, rust-streaked steel tugs with their owners’ names painted along the sides of their hulls in big block letters. But, non-commercial vessels can also perform salvage operations, as was the case of a yacht that came across a stricken 85-foot Azimut in the azure waters of the Bahamas.

A yacht named Esoteric was traveling near the Bahamas when it responded to emergency reports about a nearby vessel sinking. When Esoteric arrived at the scene, its crew came across a capsized 85-foot Azimut named Star One. The location was a busy sea lane with coral reefs not too far off in the distance. Esoteric towed Star One to the closest harbour. There, Bahamian law enforcement officials issued orders for Star One to be left anchored outside the harbour entrance.

A few days later, Overseas Salvage & Maintenance, a professional salvage company, entered the picture. It was hired by Star One’s insurer to right the capsized yacht, pump it dry, and tow it back to Miami. The cost for these services was $93,000. A second salvage company was then paid $2,800 to tow Star One to a boatyard on the Miami River.

As pointed out earlier, success of the salvor is necessary to give rise to an award. But how does one measure success? According to case law, to be “successful,” a party need not be responsible by itself for saving the property at issue; “it is sufficient if his efforts contributed in some way to the ultimate success.” Legnos v. M/V Olga Jacob, 498 F.2d 666, 672 n.8 (5th Cir. 1974).

While it’s true that other vessels were brought into the picture after Esoteric left Star One at the harbour entrance, Esoteric’s efforts nonetheless did contribute to the success of the operation. In addition to citing case law supporting the position that Esoteric needn’t have been the sole salvor, the appeals court also considered other factors here.

The court examined the question of what would have happened if the Azimut had not been taken into tow by Esoteric. Rather than being safely left at anchor in 35 feet of water at the entrance to a harbour, the Azimut could have sunk in water that was more than 6,000 feet deep. Being that the location was a busy sea lane, the capsized yacht could have been struck by other vessels. The court also recognised the fact that for the few hours that Esoteric was on site, the vessels had drifted toward coral reefs, some of which were only six feet from the surface.

Although the appeals court did not see justification for attorney’s fees granted by the lower court, it did agree that the owners of Esoteric were entitled to a salvage award. This demonstrates that yachts can be entitled to marine salvage awards in a manner similar to commercial salvors.